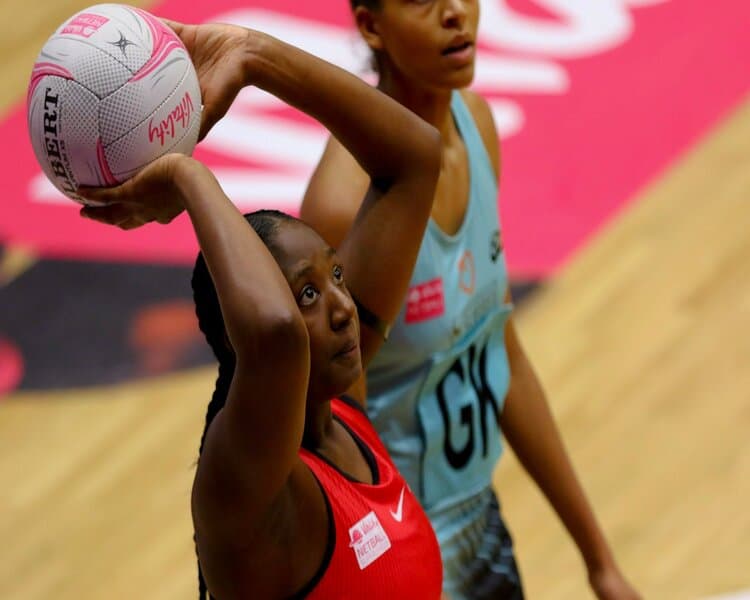 A dominant Mavericks kick off their 2021 campaign

In our opening match of the season, Saracens Mavericks faced Surrey Storm in Wakefield. A dominant performance saw Mavericks take a decisive victory to earn their first points of the season.

The first quarter saw a promising start from both sides, Kadeen Corbin and Chloe Essam converted goals with ease as a confident Mavericks side took an early lead. The strong connections between the players, who have had several seasons to build on their bonds on and off the court, came through and gave them the edge.

Throughout the second quarter, Mavericks maintained and extended their lead. With a formidable defensive line-up in the form of Jo Trip and Razia Quashie, the Surrey Storm shooting circle struggled to convert to goal. Our midcourt worked tirelessly throughout the match, ensuring swift connections that enabled an interception from our defensive duo to be converted to goal. The half-time score was 29-17.

Changes were made in the third quarter, which saw Bella Baylis step onto the court at Centre. The teenager, who came up through the Saracens Mavericks Pathway, earned her first VNSL cap and became Maverick #93. Steph Collard came on as GD and Jo Trip moved back into GK. Even with new players on court, Mavericks remained dominant and maintained their lead.

Another Pathway product, Britney Clarke came on as GS in the final quarter. Another youngster who was promoted from Maverick’s U21 squad this season also made her VNSL debut, scoring goals effortlessly. She became Maverick #94. Saracens Mavericks continued to build on their performance so far and ended the match with a score of 54 – 40.

Saracens Mavericks strong performance is only the beginning, and there is a lot of potential for this team to grow and build on their strengths as the season progresses. With all 12 players taking to the court throughout the match, the possibilities are endless for this side. Kadeen Corbin’s brilliant shooting saw her earn the Player of the Match, awarded by Vitality.

Today they take on Leeds Rhinos at 7:15pm, which can be watched live on Sky Sports Max/Arena and on YouTube.