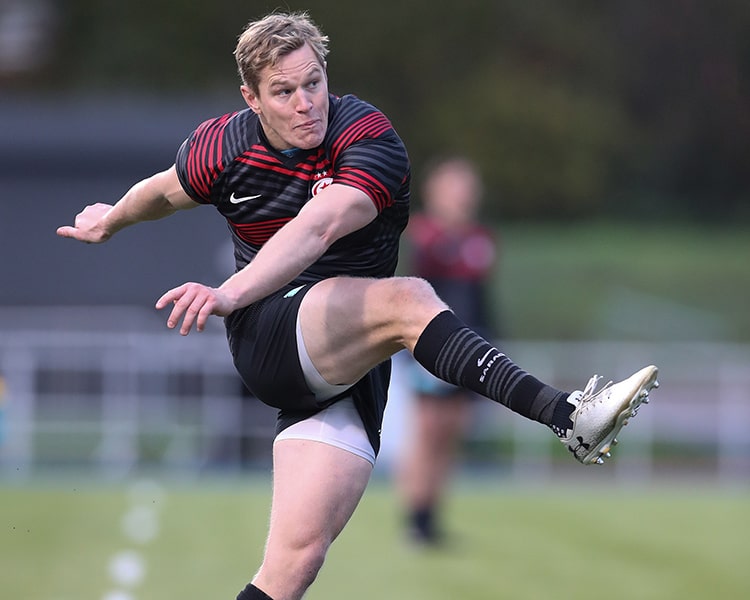 A massive credit to everyone who came down – Hooley

Saracens Men returned to action in front of 1,000 spectators on Saturday as they overcame a Leicester Tigers XV 45-24 at Copthall Stadium on Saturday.

The players were welcomed on to the field to rapturous applause, reunited with supporters following an eight-month absence due to the Covid-19 pandemic.

For fly-half Will Hooley, it was the first time he had played in front of the Sarries faithful since joining from Bedford Blues and the USA international was grateful for every single person in attendance.

“A massive credit to everyone who came down, it really means a lot as a player. We’ve been training a long time so to get back and play in front of people was awesome.

“The rugby was good, but the main thing was having fans back.”

“The rugby was good, but the main thing was having fans back.”

With the backing vocals of those in the stands, Hooley excelled at half-back and aided a terrific team performance with an expert kicking display, in hand and from the tee.

The ex-Northampton Saints man was successful with all seven of his shots at goal and feels the group can take positives from the friendly as they continue their preparations for the 2020/21 Championship season.

He said: “You saw a first half where we were really grinding it out which wasn’t surprising as you work on things in training but until you actually get into a game you don’t really know what quite is going to happen.

“We struggled sometimes, but I thought the way we were straight back on them after they scored was really good.

“I think we just got the feeling of the game in the second half; the understanding was there and we gained momentum which was massive. Leicester probably had that in the first half and we had it in the second, tried not to let go of it and there was some outstanding play from some individuals as well. As a collective everyone was very buoyant and had that momentum to push forward.

“The guys have got confidence and we’ll take some good confidence from this moving forward into the new year.”