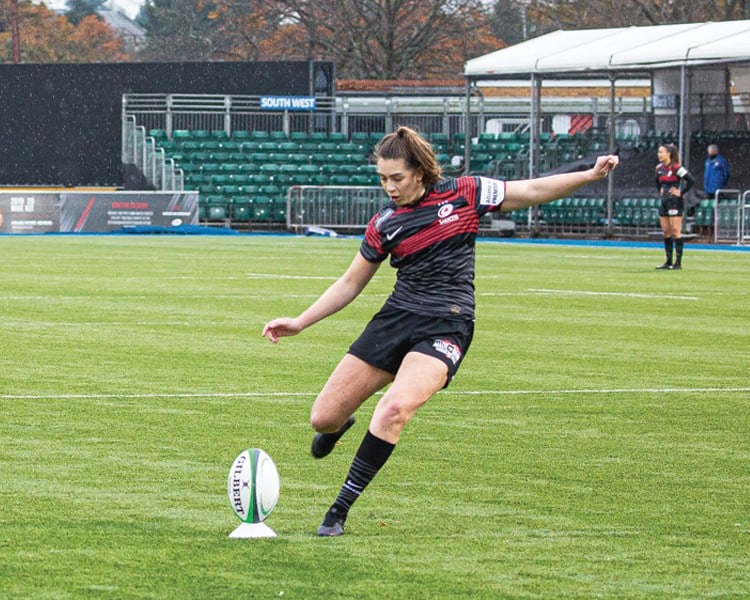 Holly Aitchison insists her side relish the chance to show how difficult they are to beat defending the Saracens way after a thrilling finale against Wasps Ladies.

Stepping up to play fly-half in the absence of Zoe Harrison, Aitchison put on a passing clinic to unlock the Wasps defence on several occasions in a dominant firs-half.

It was a different story after the break though as the visitors capitalised on favourable conditions to mount an incredible comeback, albeit not enough to overturn the deficit.

And Aitchison believes it was the team’s ability to adapt during a difficult second half that eventually saw them keep out their talented opponents – a trait that Saracens pride themselves on.

“We’re lucky that we have a quality squad”

“We just wanted to keep it tight at the end. The girls have spoken about the quality we need to have in the final stages to close games,” said Aitchison.

“We knew coming into the game that conditions were going play a huge part and they played a massive part in us looking to pin and play the territory game like we did in the first half.

“It’s difficult to maintain when you’re playing against the wind in the second half but we stuck in there.

“That is the Saracens way, we can see out games until the end and it was just about adapting to the conditions out on the pitch.”

Saracens were without two mainstays of their forward pack in Poppy Cleall and Marlie Packer, while the likes of Hannah Botterman and Vicky Fleetwood are still absent.

But Aitchison believes her squad showed impressive strength in depth on the weekend and will need to continue showing that in their next few games.

“We’re lucky that we have a quality squad so when people are stepping into the shirts no matter the name it’s still a Saracens player,” she added.

“We were missing some internationals but we know we have quality players coming into the side.

“Ahead of Bristol we need to focus on our game management and I’m sure having Zoe, Poppy and Marlie back will help with that but it will be a good test.”