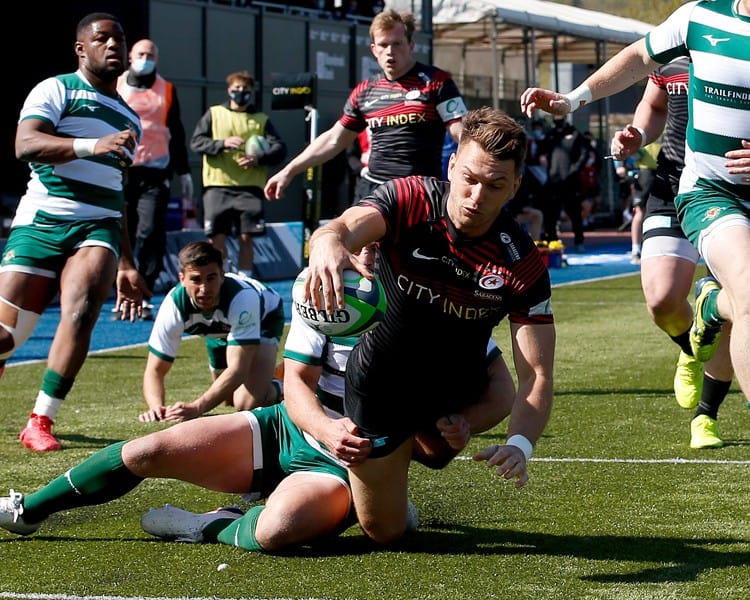 Alex Lewington knows exactly how tough the Greene King IPA Championship can be from previous experience at both ends of the table, and has become a key member of the Saracens leadership group as they try to navigate their way back up to the top flight.

The winger won the title with London Irish during their promotion campaign of 2017, but also spent two years at Nottingham where he was finding his feet in professional rugby.

Lewington has started this season in scintillating form for the Men in Black, scoring seven tries in as many matches so far and he believes that his past in this division is allowing him to flourish.

“Having that experience does definitely help. The team coming down is expected to go back up but it takes a lot of hard work and it is really challenging, so it’s been great to be involved so regularly this season.

It’s always nice as a winger to get over the try-line. We all want to score as much as possible and I’m really enjoying it, the ball seems to be coming my way a fair bit so I’m happy with how it’s going!”

The 29-year-old delivered a presentation to the squad in pre-season to explain what the Championship is like, and how hard Sarries will have to work to achieve their goal.

“It helped me express to the lads what to expect, the kind of treatment we’ll get but also the things that we can really enjoy. We are a very tight group so we want to have fun and embrace it against different teams in new environments.

Myself, Alex Day and Will Hooley have a fair amount of experience in the Championship so we could show them a taste of what we are up against and explained how it is a very tough challenge every week.”

Lewington started his career at Leicester Tigers and then scored 16 tries in 30 appearances for Nottingham before moving to London Irish. After making 100 appearances for the Exiles he signed with Sarries, and is now using his experience to assist a number of future stars.

“Whilst the internationals have been away I’ve been happy to step up and be a bit more of a leader. With my age and experience I can hopefully help the younger boys and contribute on and off the pitch as much as possible. We’re fortunate to have so many leaders in this group that we are able to express ourselves as much as possible.”

The former England Saxon admitted that with the uncertainty over this season throughout last year, it is a relief to be playing again and the squad are embracing their aim of Championship glory.

“It was really tough at times. The Premiership started again and we were just watching and going through our pre-season which was challenging as we didn’t know what was happening with the Championship, but it’s made us appreciate it a bit more and we’ve definitely got back in to a rhythm as you’ve seen this past month or so.

There are a lot of close friendships here and that has really benefited us. We have a great owner, a great set-up and great people so it says a lot about how this group have rallied around each other, and a year like this won’t outweigh the good times we’ve had.”

The opening day defeat to Cornish Pirates saw the season start in disappointing fashion but since then Mark McCall’s men have won six matches consecutively and are firmly in the mix for the play-offs, knowing there is no more margin for error.

“We’ve come a long way from where we started. The Cornish Pirates match was a reality check for us and showed how hard we have to work in this league. We’ve definitely turned a corner with our recent performances and we can take that forward as we look to finish strongly.

It’s certainly a different concept but we’re used to playing in big games with high expectations. Each week is a different challenge to us but with some huge occasions coming up we will relish it and pay everyone the respect they deserve.”

With the coaching team recently signing new contracts until 2025 there is a huge amount of continuity at the club, something that Lewington is delighted to see.

“It’s great to have that stability in the group. We talk a lot at this club about building relationships so to have that ongoing for another few years is huge and on a personal level I really enjoy working with them.”

The significance of this season is not lost on the flying winger, and he stressed how much effort is being put in to ensure a path to the Premiership is delivered.

“For the club it’s vitally important. Our squad needs to be playing in the Premiership and everyone is ambitious so we want to get back in to Europe. I think what you’ve seen over the last few weeks though is how hard everyone is working to make that happen, we realise that we don’t automatically deserve to be there and have to get there by taking care of this season.”

The recent victory over Ealing Trailfinders has meant that the journey up the table has gathered even more momentum, a result that Lewington believes is one the squad can be very pleased with.

“It’s a good indicator of where we’re at for sure. It gives us a heads up on their style of play but more than anything it’s a big win to tick off and we will use that as a marker moving forward.”

With the shortened format of this season just five more victories could mean that promotion is confirmed, and one certainty is that if Lewington keeps delivering on the pitch, that trophy could be well within Saracens’ grasp.