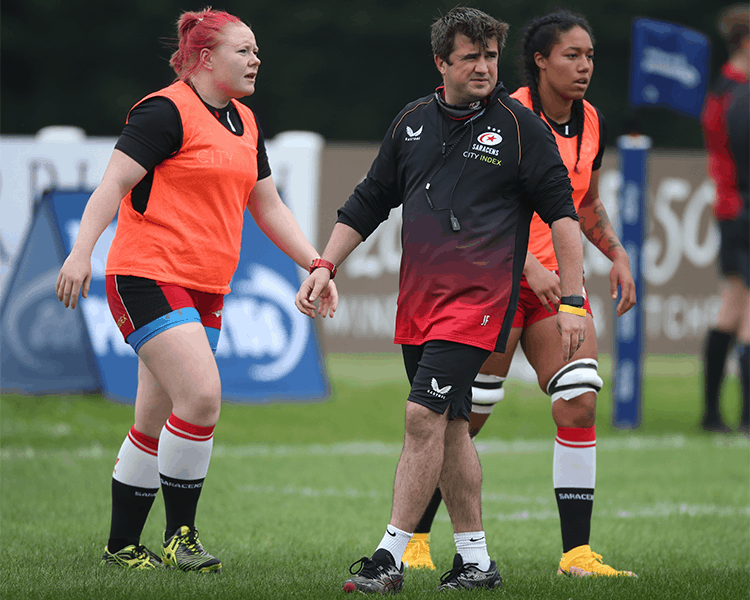 Head Coach Alex Austerberry commended the defensive resilience of his side after a hard-fought 34-5 win against Worcester Warriors.

The Women in Black offered very little opportunities to a spirited Worcester side, and Austerberry was pleased with the way his team controlled the game, a recurring theme of their performances this season.

He said: “They (Worcester) are one of the most improved teams in the league. So to keep them at arm’s length for most of the game was really pleasing.

“I think they were coming in with an early hit at the set piece which meant we were getting into a bit of a trapped position. They’re a good scrummaging side so it was a steep learning curve against a really strong tight five.

“It was good preparation for next week and shows how much we need to scrummage as an eight.”

Most of the damage was done in the space of eight first half minutes which saw Sarries score two tries and a penalty on their way to a commanding 20-0 half-time lead. Austerberry was delighted with the way his team seized the initiative in challenging conditions.

“We won the kick exchange on a few occasions and when we did that we got our rewards.”

Saracens’ second try of the afternoon was a testament to this as Sarah McKenna’s high boot coupled with a menacing kick chase forced a mistake from the Worcester full-back which allowed Zoe Harrison to capitalise and score.

To cap a great afternoon for the team there were two pleasing individual milestones too. Marlie Packer made her 50th appearance for the club and Austerberry spoke glowingly of her contribution to the team.

“She is a really influential figure for us. She’s always full of energy and a real driver of standards so she’s a huge asset to the team.”

It was also a special day for Hannah Botterman as the prop returned from injury to make her first appearance of the season.

The Head Coach was delighted to see her back on the field of play but insists her introduction will not be rushed.

“This is part of Hannah’s managed return to play. We want to build her back in, ensure she’s confident, prepared and in the right place to play.”

With 98 England caps between them, Packer and Botterman are sure to play a key role in Saracens pursuit of silverware this season.

Potential title rivals Exeter Chiefs are Saracens next opponents. The Women in Black will be hoping to make it five wins on the bounce back in front of home support at the StoneX Stadium next Sunday., with tickets still available here.