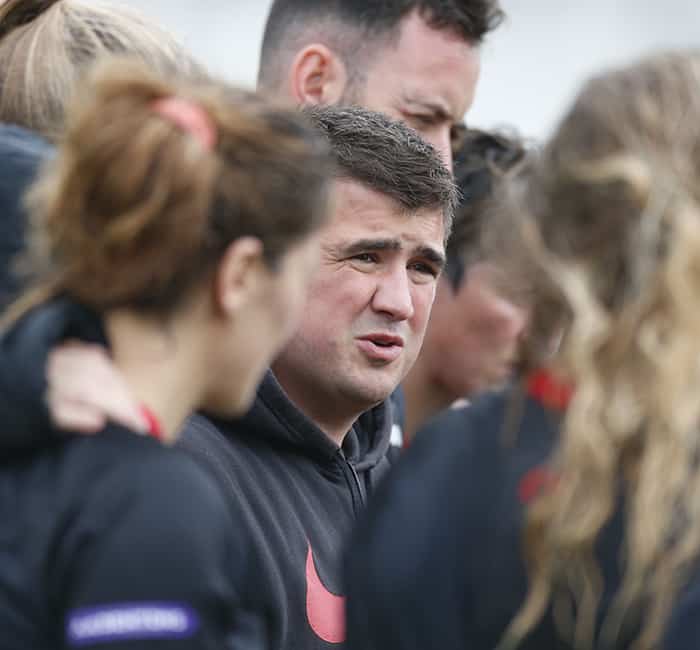 Austerberry: It wasn’t a classic, it was never going to be

Saracens Women Head Coach Alex Austerberry was pleased with how his team adapted their game in the 42 – 7 win over Richmond Women.

The re-arranged round 10 Tyrrells Premier 15s fixture was played in the midst of Storm Dennis and both sides struggled for rhythm in a stop-start first half that finished 14 – 7 in the visitor’s favour.

Saracens’ forward power told in the second half though as they scored four more tries to make it 12 wins from 12 and moved to the top of the TP15s table.

Despite coming away with the full five points, Austerberry felt Saracens took some time to adapt their game to the conditions on Saturday.

“If you look at the result we’ve come here and got exactly what we wanted, which was a bonus point win. I think performance-wise credit to Richmond, certainly in the first half they capitalised on our errors and put us in positions where it was difficult to get out of.

“As the half grew, we started to play a little bit more appropriate rugby but still there were some silly decisions and poor execution.

“Half-time gave us an opportunity reset and it was just brighter, smarter, more appropriate rugby for the conditions. That then gave us the platform to manage the game, score the points and build from there.”

Most pleasing for him was the way his team took and executed what they’d discussed at half-time onto the pitch for the second 40.

“We started playing the game plan we talked about at half-time. More direct, more intent in the collisions and smarter off the back of that.

“The waves of attacks, the waves of collisions just gave us the foothold in the game to really push home our advantage.”

“It wasn’t a classic, it was never going to be, but hopefully we learned some lessons in the game and can take that forward.

“In terms of where we’re at it’s put us in a real good place, to the top of the league and from there we can build.”

On top of that, the individual performances in the pack, including the return of players from injury were significant pluses for the head coach.

“I think there were some real good performances. You’ve got to look at the likes of Botts (Hannah Botterman), Rocky (Clark) and May (Campbell), the way they played, they did really well.

“It was good to see Bryony Cleall back on the field after such a long time and Jodie Rettie as well, getting a try and carrying well.”

This international break during the Women’s Six Nations was always going be a key period ahead of the final block of matches, but the game against Richmond has meant that Austerberry and the coaching staff have had to reset their plans for the rest of the season.

“The plan was we’d have two weeks of rest and recovery during this block but because of this re-arranged fixture we’ve changed things around.

“This week will be a recovery week and then we’ll prepare for the Gloucester-Hartpury Dev game which is really important for where we want to be in terms of that almost second ‘pre-season’ block.

“From there we’ll have three weeks to prepare properly for the six double headers on the bounce with Firwood Waterloo first up on Saturday 21 March.

“It’s going to be a really important phase of getting recovered, rested and then putting on the next levels of our structures so that we can go into the back end of the season really firing and hopefully secure that play-off spot.”

Get your tickets to our next home games at Allianz Park!