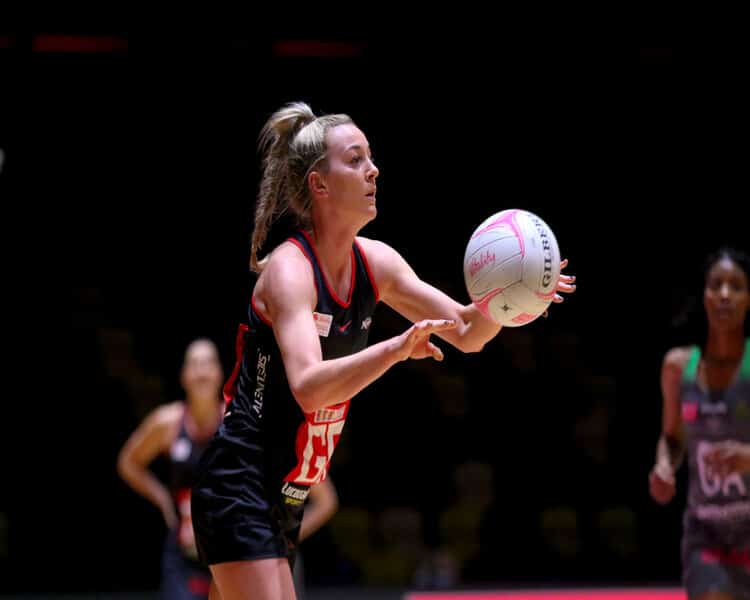 A game of two halves ended Saturday’s netball matches as Saracens Mavericks took on Celtic Dragons. Although Dragons had an amazing start and kept the game within reach until half-time, Mavericks ultimately took control of the match and brought home the much-needed win.

Dragons came back in the second quarter, taking every opportunity to catch up with Mavericks, closing the gap at one point. Towards the end of the quarter, Mavericks found their rhythm again and regained a three goal lead. The half time score was 23-20.

The championship quarter went Mavericks’ way as Beth Ecuyer-Dale and Britney Clarke came on court, replacing the Corbin sisters. The youngsters proved their worth and made a huge impact on the game. The combination of Marshall and Ecuyer-Dale in midcourt proved to be exactly what Mavericks needed in the second half. Mavericks built up their lead and ended the quarter with an eight goal advantage.

Aliyah Zaranyika came on in the final quarter as GD, showing the strength of the youth in the Mavericks side. As Mavericks began to pull away, their confidence grew. Gabby Marshall came from nowhere to make some incredible interceptions in the final quarter. All sections of the court seemed to be working seamlessly to keep the score line growing, proving to be Mavericks’ best quarter of the match by far.  The final score was 59-39.

Chloe Essam’s strong work rate throughout the match was rewarded as she was named Player of the Match. Her role in the attacking end was pivotal in the win against Celtic Dragons.