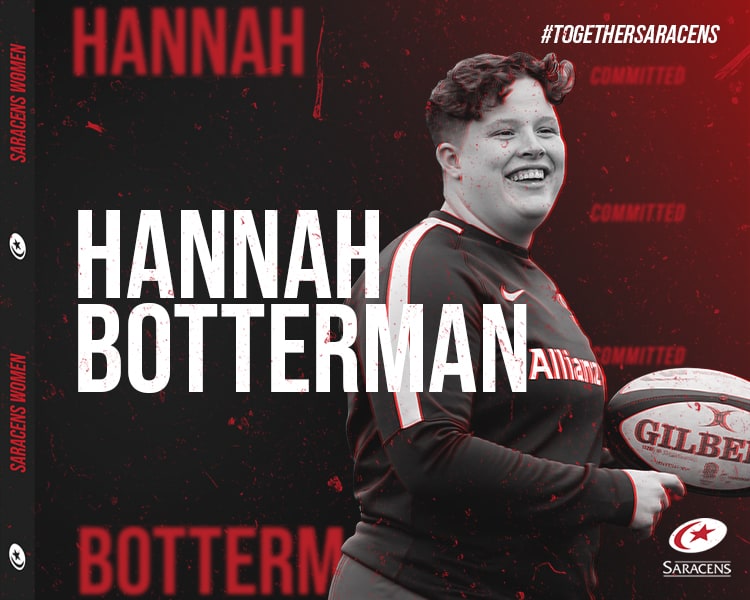 Saracens Women is delighted to announce Hannah Botterman has committed herself to the club for the 2020/21 campaign.

The 21-year-old made her Sarries debut in the Premier 15s three years ago and has gone from strength to strength since.

Her performances in the 2017/18 season led to England recognition as she won her first Red Roses cap against Canada ahead of helping the Women in Black to the league title, playing 80 minutes in the final win over Harlequins.

“The club is at the forefront of the women’s game and offers the perfect environment for me to be the best I can be.”

A popular figure among the squad and key cog of the way the Women’s side plays, the prop is delighted to be staying in north London.

“I’m very excited to be committing to the club for the next season,” she said.

“Saracens has become a home for me over the last two years and I can’t wait to get started for another year. The club is at the forefront of the women’s game and offers the perfect environment for me to be the best I can be.

“The players at the club challenge and push me to be a better player, and I wouldn’t want to play rugby with anyone else, anywhere else.”

Head coach Alex Austerberry said: “Hannah’s experience and game understanding belies her age. At only 21, her best years are certainly ahead of her and it is almost frightening on where her game could develop.

“An incredibly physical player, who can be an absolutely devasting ball player her game has taken huge strides forward. As she continues to mature and develop her influence on games and the group will only grow and grow.

“Another young, local and extremely talented player who is fully of energy. I have no doubt that Hannah will play a huge part in the growth and development of Saracens for years to come.”