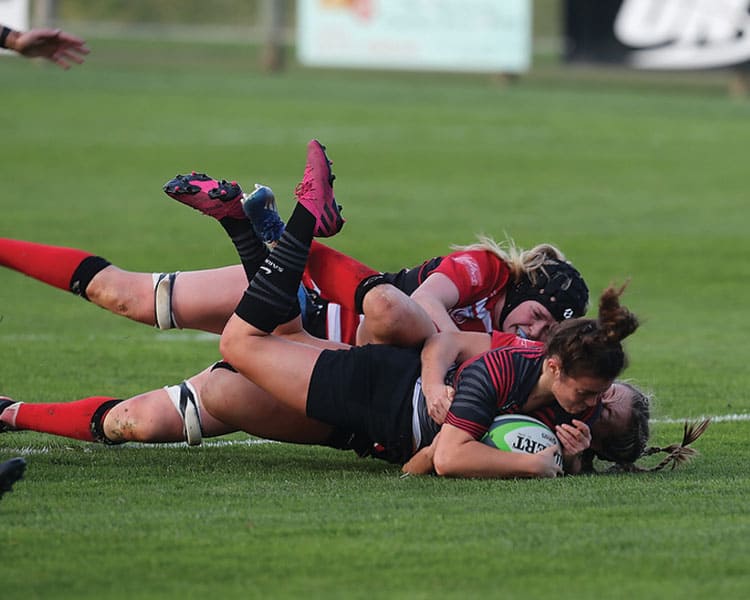 May Campbell scored a hat-trick as Saracens women continued their superb start to the season with an emphatic 45-3 victory over Gloucester-Hartpury Women RFC.

The hosts had opened the scoring through Millie Wood but the Women in Black responded with scores from Campbell, Eloise Hayward, a penalty try and Lotte Clapp to lead 24-5 at half-time.

There was no let up after the break and a fast start from the visitors saw Georgia Evans cross before Campbell grabbed two more scores to seal a fourth-straight Premier 15s win.

Gloucester-Hartpury came alive first and a superb pass from fly-half Lleucu George put Wood through a gap in the Sarries defence to score an unconverted try after 11 minutes.

A strong run from Emma Uren, back at full-back, led to a penalty that the visitors launched a strong catch-and-drive from, allowing Campbell to pounce on the ball to score her first on 26 minutes.

And just a few minutes later a line break from Holly Aitchison had the hosts scrambling in defence before a series of slick offloads eventually found Hayward with time to score. Zoe Harrison converted for a 12-5 lead.

The penalty try came after a high tackle on Clapp denied the wing a certain score and soon enough the captain got her name on the scoresheet, going over in the corner to give Sarries the try bonus point and a healthy 19-point lead at the break.

Alex Austerberry’s side picked up where they left on straight after the break as they won a penalty straight from the kick-off before Evans scored from inside five meters.

Campbell secured her second with just under 20 minutes to play through a pick-and-go and the hat-trick was complete in similar style, again from close range, which Harrison expertly converted to seal a dominant victory.