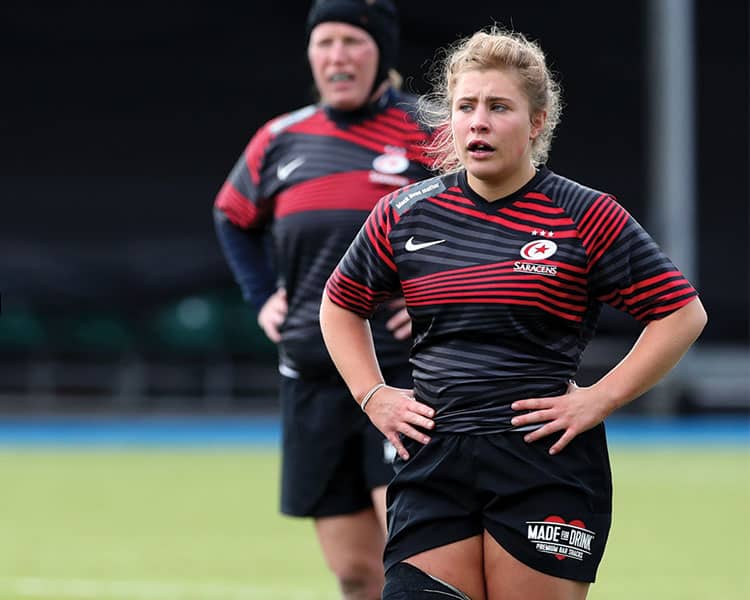 May Campbell insists her rich vein of scoring form is purely a bonus after she doubled her tally for the season in Saturday’s victory over Gloucester-Hartpury Women RFC.

The hooker registered a hat-trick of scores at the Alpas Arena, all expertly finished from five metres, as Sarries recovered from a slow start to record a fourth-straight bonus-point win.

Campbell has now scored in all four of the Women in Black’s opening fixtures as Alex Austerberry’s side sit second in the Premier 15s table.

And although the front-rower’s strike rate is something to behold she admits her focus must remain on making an impact around the pitch as part of an impressive forward pack.

“It obviously feels great to be scoring.”

“It was a whole team effort to get us that close and all I had to do was go those extra few meters to get us over the line,” said Campbell.

“It obviously feels great to be scoring. Traditionally, tries are quite few and far between for us forwards so it’s always nice to score.

“As a front row the thing I’m most concerned about is hitting rucks, hitting the target in the lineouts and everything else is just an added bonus.”

Sarries were electric during a 15-minute spell at the end of the first-half as scores from Campbell, Eloise Hayward, Lotte Clapp and a penalty try opened up a large lead at the break.

Campbell admitted the team’s positive reaction to going behind made a big difference in turning things around on the day, although they can’t afford to let the same mistakes happen this weekend against a dangerous Wasps Ladies outfit.

“It was just about getting organised especially in our defence, after the first try from broken play we minimised their ability to create those situations,” she added.

“I think it was an issue that we managed to resolve on the field. Ahead of Wasps I think we just need to add ruthlessness and physicality at the breakdown and in defence.

“We want to cut off all options so from the first minute they can’t see any gaps because we’re up in their faces.”