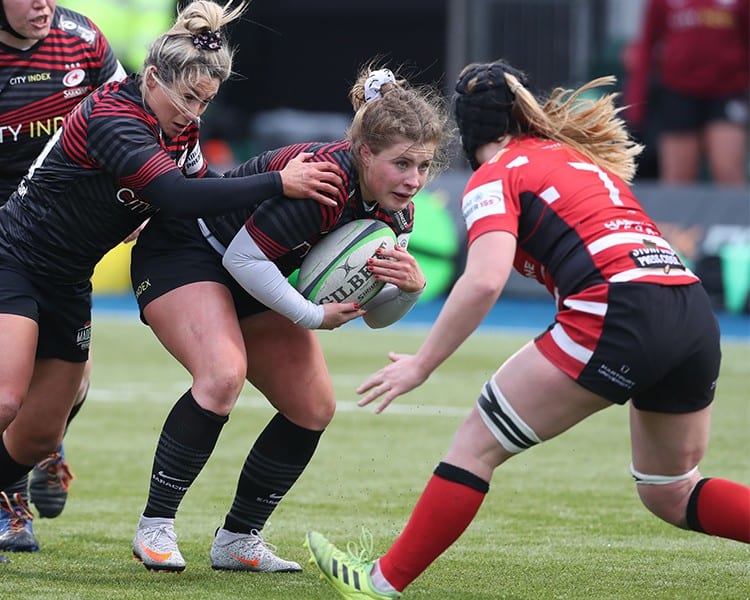 May Campbell has challenged Saracens Women to prove they have learnt their lesson from last weekend’s defeat to Wasps Ladies at Twyford Avenue.

The hooker scored twice in a feisty London derby but the Women in Black succumbed to a narrow 26-25 defeat, their second in this season’s Allianz Premier 15s.

Sarries had the better of things up front but it was Wasps’ accuracy and pace with ball in hand that caused Alex Austerberry’s side trouble.

And Campbell believes if they would have trusted slightly more in their game plan, the outcome could have been far more positive.

“I think they [Wasps] executed really well when trying to get around us and then made the most of having one of the best back threes in the league,” she said.

“We didn’t get our kick chase working effectively and played into their hands a bit,” she said. “We should have stuck more to our game plan.”

“They’ve got a lot of Sevens players and in the nice weather I feel we maybe tried to get our hands on the ball a bit too much compared to the last few weeks where we’ve been playing in freezing conditions and I think we need play slightly more to our strengths.”

Regardless of the disappointing result, the front-rower accepted the spectacle was a perfect example of the increasing quality and competitiveness in the league.

She added: “It’s not great losing but it’s fantastic to see the league being so competitive and hopefully it’s a sign that more players are putting their hands up not just at club level but at England too.