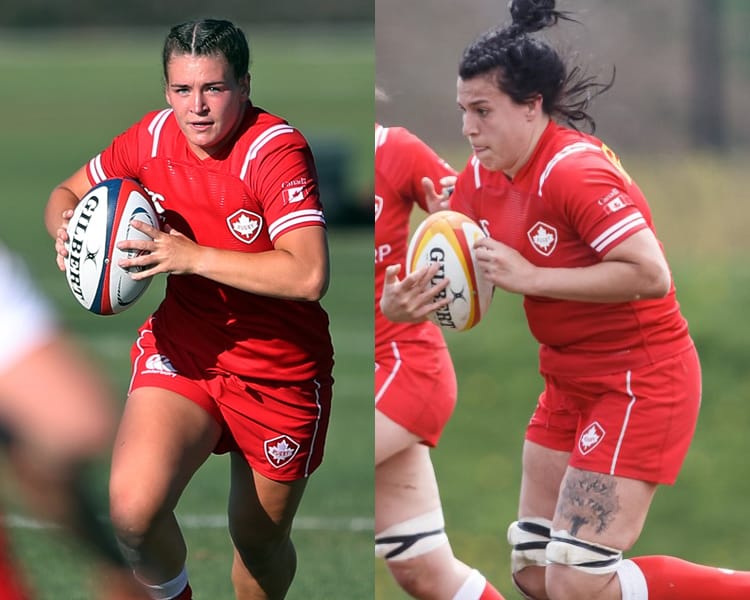 The duo become the second and third Canadians to be part of Alex Austerberry’s squad by joining Sophie de Goede at Copthall Stadium.

Known for her strong attacking game, Corrigan made her international debut in 2018 against Scotland on the wing and scored twice from outside centre in her last Test match in November 2019.

“We welcome both players to the club and are excited about what they will bring to the club.”

“Saracens have built such a great programme and have some of the best athletes who I am eager to learn and grow from. After watching the successful first half of the season from home I’m really thrilled to be given the chance to join the girls for the remainder of the season in hopes of another Premier 15s Championship.”

Taylor began playing aged 12 as a lock and back row and carried on her rugby at St. FX University for five years whilst also playing provincially for Nova Scotia. Capped by Canada for the first time in 2015, she earned a recall to the international side for the 2019 Can-Am Series.

The majority of her game experience has come through playing for Railway Union RFC for three years in the All Ireland League, helping them to win their first ever title in 2019.

“I’ve been anxiously watching the first half of the season from my couch in Halifax, Canada and I’ve never been so excited to get onto a pitch to train and play!” Taylor said.

“I’ve joined the Saracens because I want to train with some of the best players in the game in order to get ready for the 2021 World Cup. I’m really looking forward to being in a competitive training environment with a team who has clearly developed a strong culture and have carved themselves into the league as the team to beat.

“Training with physical players such as Poppy Cleall, Marlie Packer, and my own teammate Sophie de Goede will improve my contact and set piece skills. I’m hoping that I can contribute to Saracens’ success and help the team to win another Premier 15s title!”

On the new signings, head coach Austerberry said: “Alysha is a powerful and explosive midfield player whose physical attributes make her a threat both sides of the ball. A talented player with a real desire to maximise her potential, I have no doubt we will see her grow and develop in a Saracens shirt alongside a very talented group of backs.

“Emma is a player who brings great physicality to the game. She has the ability to change momentum of games in an instant. Her game is underpinned by work rate and does a lot of the work that does not make the highlight reel but is fundamental in making it happen. In what is a talented and competitive ‘engine room’, we look forward to Emma driving us forward on and off the field.

“We welcome both players to the club and are excited about what they will bring to the club.”