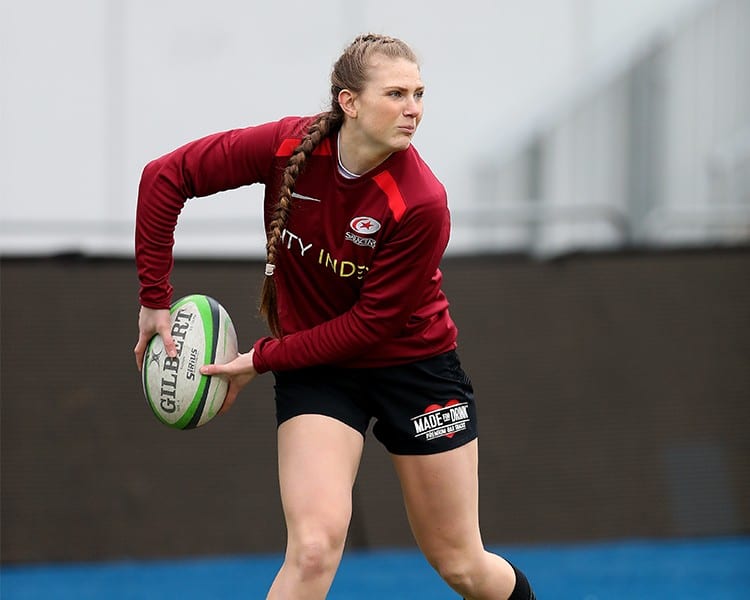 Lotte Clapp has captained Saracens Women to both of their previous Allianz Premier 15s titles, and after a year like no other would love nothing more than to end this campaign with a third consecutive trophy.

The 26-year-old lifted the silverware at Trailfinders Sports Club and Franklin’s Gardens in 2018 and 2019, and is now looking to make it a hat-trick at Kingsholm against Harlequins on Sunday.

The Women’s game has seen a whole host of law variations after restarting from COVID, but still burning away is the fact that last season was declared null and void in the middle of the pandemic with the Women in Black sitting top of the table.

“I didn’t realise how much I missed having a crowd until Saturday, it just brings an extra level! “

“It was such a shame how it was cut short, being null and void made it feel a bit like it was for nothing which was really hard for all of us. That has given us more motivation though to finish this one properly.” Said Clapp.

With 106 appearances for Saracens she has played in some huge matches since joining in 2013, but Clapp admitted that the semi-final against Loughborough last weekend was right up there as spectators returned to StoneX Stadium in record numbers.

“That was the crowd that I’ve enjoyed playing in front of the most, and probably the biggest crowd as well. It was amazing, especially when we ran out and you could hear everyone, they got behind us so well. I didn’t realise how much I missed having a crowd until Saturday, it just brings an extra level!

“It went right down to the wire but we expected that. The score with ourselves and Loughborough has been within eight points the last few games so it was never going to be an easy game.”

With just four points separating the sides in the final play there would have been many who could have forgiven the players for showing signs of nerves, but Clapp was confident that they could trust their formidable defence.

“It was really tough. We thought we had got the job done and then they scored with two minutes left and that feeling when you look up at the clock and realise there’s still some time to go is horrible.

“We just had to stay calm which is exactly what we needed, we knew we’d done it before and that we could rely on our defence. Marlie’s turnover at the end was a relief for everyone!”

The England international is very familiar with facing Quins in finals as the two sides have faced off in both of the previous two, and she says that could help her side when the whistle blows on Sunday.

“Considering we’re playing Harlequins we know it will be another tight game, our last one against them was a draw which shows how tough it will be.”

She continued: “They are very physical but also have a very sharp back-line. They scored some great tries against Wasps in their semi-final so we’ll have to shut them down and not let them get any momentum.

“This is our third final against them so it’s safe to say that we know them as a team. We’re confident in what they will bring and have played them once this season so we will take a lot of learning from that game.”

Clapp has scored eight tries in 18 matches this season confirming her place as one of the most prolific wingers in the division, and the prospect of another triumph on Sunday is what has been motivating her all year.

“It would mean everything to us to win it. Saracens is all about the winning way across the whole club and it’s not been an easy ride with all of the COVID related changes so to lift the trophy at the end would be an amazing way to finish.

“Also due to the pandemic there are really simple things that we haven’t been able to do such as have a huddle, celebrate tries and train in big groups so it has made it really difficult and would make all the hard work worth it. It’s what you work for and I just want to build on it and hopefully keep the success coming!”

Kingsholm is the venue for the showpiece event on Sunday, and again that adds even more excitement for Clapp.

“It’s something new, a big stadium with more spectators so it should be a brilliant experience. It’s good to be at a neutral ground for the occasion and hopefully the supporters can get behind us again.”

With both the Men’s and Women’s teams enjoying plenty of success in recent years, Clapp revealed that emulating their triumphs is a big part of how the Women operate.

“We talk about it as a group that we want to do them proud and live up to all the success that they’ve had in the last few years, so if we keep winning trophies that’s the best way of doing it!”

It is clear at Saracens that every aspect of the club is looking to develop, and looking beyond Sunday, Clapp is hugely excited for what is to come in the future both on and off the pitch.

“We all look forward to everything that is coming. When you arrive at the stadium and see all the building work you can see the ambition here, so it’s great to see how hard everyone is working to make steps forward.”

Clapp has already written her name in to the Saracens history books by captaining them to two titles, and if it was to become a third on Sunday that legacy would continue to grow beyond legendary status for her in the Black and Red shirt.