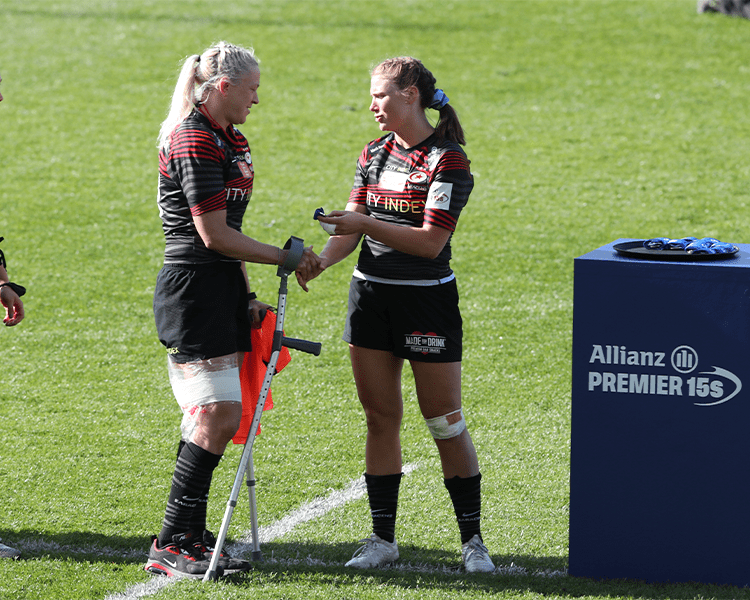 Saracens Women captain Lotte Clapp said her side has no lack of belief despite their 17-25 loss to Harlequins in the Premier 15s final.

A brace from Marlie Packer and a Sophie de Goede try weren’t enough for the Women in Black as they fell short of the league crown in Kingsholm.

Although finding disappointment in defeat, Clapp said her biggest takeaway from the season was her side’s unwavering confidence on the pitch.

She said: “We’ve got belief as a team. Even down to the last few minutes we were still playing and believing in ourselves to take that win.

“Yes, it didn’t come but we’ve done that throughout the season, and we have had scores go our way.

“We’ve always had that belief as a squad; not giving up, stepping up, but it just didn’t come through.”

With postponed fixtures, distanced training and empty stands, the 2020-2021 season brought a host of new challenges for Saracens and the league as a whole.

Commenting on how her team will bounce back, Clapp emphasised the importance of being critical in training and building on winning performances.

She added: “It’s been really difficult this year.

“Being as a team and being sociable is such a huge thing for a side. Having a year with covid regulations that prevented us having that time with each other has been really tough.

“It’s affected teams across the league in different ways but when you want to build a team and build a culture, it becomes quite difficult when you can’t spend that time together.

“There will be changes that need to come. We need to learn as a team, learn from the mistakes that we’ve made.

“Sometimes we turned up to games and performed like that but got the win, so we need to be stricter on ourselves to improve.

“Even when we win, we need to be harder on ourselves in training to make sure we’re a better team when we come to these finals.”