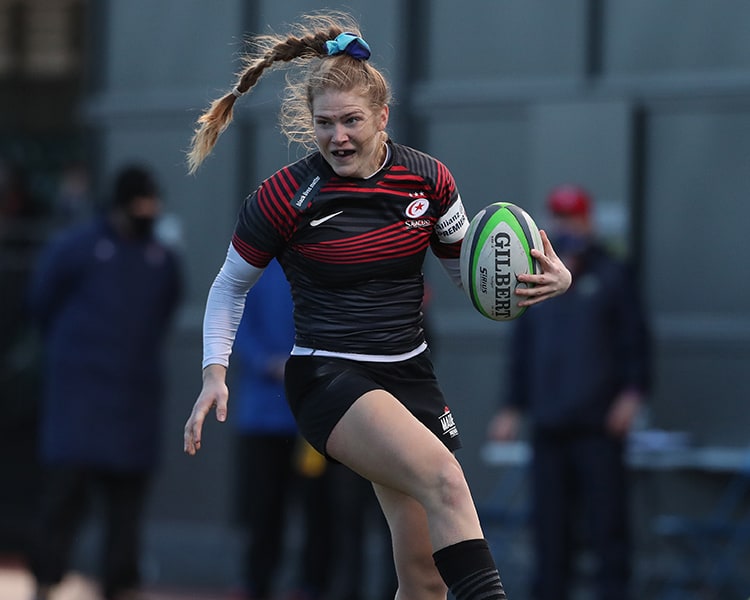 Saracens Women captain Lotte Clapp urged her side to stay positive and keep momentum as they came back to defeat Loughborough Lightning 29-24 in their final fixture of 2020.

The Women in Black were down seven points at half-time against Lightning, but second-half tries from May Campbell and Sophie de Goede helped secure Saracens’ seventh consecutive bonus-point win this season.

Loughborough went after the hosts in a physical first half at Copthall Stadium, and a remarkable defensive performance, led by Marlie Packer, kept the game within Sarries’ reach.

“We just had to come out and be really physical and that’s what we did.”

Skipper Clapp, who scored the match’s first try just six minutes in, stressed the importance of her side keeping their heads up going into the second half.

She said: “We knew that they were going to put us against the wall, but we just had to come out and be really physical and that’s what we did.

“Constantly in our season we’ve had a game of two halves, so we need to make sure that whenever we come out, we start how we mean to go on. It’s just about being really positive, knowing what we have to do and then going from there.

“You just need to keep the momentum. We were letting them back into the game too easily in the first half.”

The win keeps Saracens second in the Allianz Premier 15s table with a game in hand on leaders Harlequins, who they face in the first match of 2021 at Twickenham Stoop.

Clapp says the squad will look to take the positives from the Loughborough win into one of the most anticipated fixtures in the league calendar.

She added: “It was so important that we had that good game.

“Harlequins are going to bring it to us. We know that they’re another really physical side, they move the ball really well.

“We just need to stay switched on over the festive period and make sure we’re ready to go for that game on the second.”