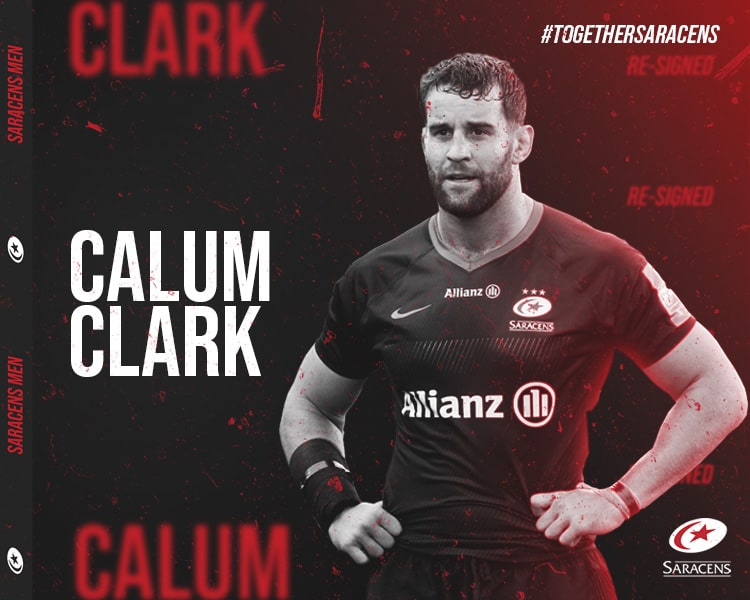 Saracens is pleased to announce Calum Clark has penned a contract extension.

The 31-year-old has signed a one-year deal and will enter a fourth year with the Men in Black.

“Calum has added enormous value to our club in a number of ways over the last three seasons.”

Clark moved to north London ahead of the 2017/18 campaign and featured 18 times as the club regained the Premiership title.

Since then the former Northampton Saints back rower has worn a Sarries jersey on a further 33 occasions and has proved an influential figure during the international periods, offering advice and leading a young group.

“I love the club, I love the boys and I’m just looking forward to contributing wherever I can moving forward, particularly next season.

“I’ll try and be a positive force and keep us all moving forward, helping the younger lads if I can as well as performing as best as I can alongside that.”

Director of Rugby Mark McCall said: “Calum has added enormous value to our club in a number of ways over the last three seasons.

“On the field he sets a great example with the consistency of his effort and he has played a key role during the various international windows when many of our experienced players were not around.

“Off the field he has a strong desire to pass on his experience and lessons he has learnt to our younger players, who are benefiting greatly from his support and time. Calum’s influence will be vital in the exciting challenge that lies ahead.”