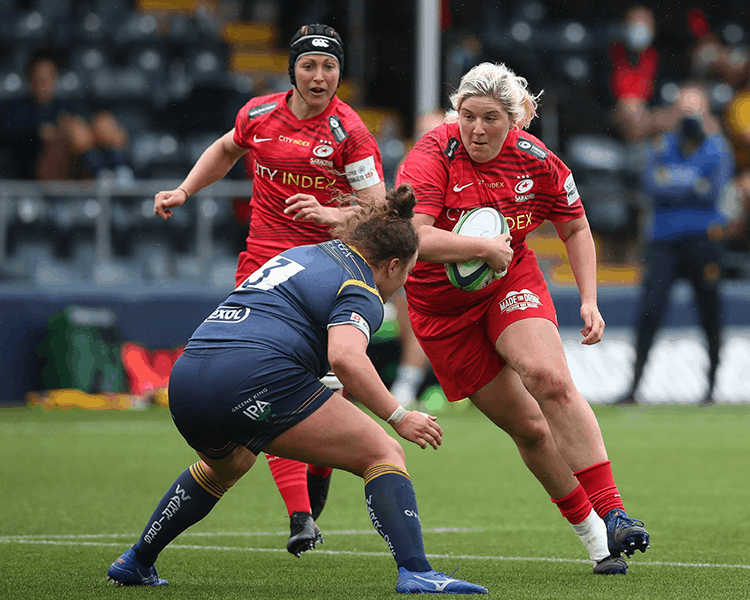 Bryony Cleall said her hopes of playing in the Allianz Premier 15s Play-Offs inspired her through her injury troubles, after scoring twice for Saracens Women in the semi-final win against Loughborough.

Lark Davies (2) and Rhona Lloyd scored for Loughborough whilst Bryony and Poppy Cleall each crossed the whitewash twice for Sarries in an exciting encounter at the StoneX Stadium.

A late try from a lineout maul kept the passionate Saracens fans on their toes, but the Women in Black held on to book their place in this Sunday’s final at Kingsholm.

“It’s all about those moments and the memories you make. When I’m injured it puts it into perspective, it’s even better when you get to make these memories again.

“Someone asked me in the crowd what kept me going when I was injured and it’s the memories you make and the moments you can have and that’s what pushed me to come back to finish the season off in the final.”

The game was played at a relentless pace, with both sides showing why they’re at this stage of the competition, and Cleall felt this was a sign of things to come in the competition moving forward.

She added: When we’re playing these teams like Harlequins, Loughborough and Wasps it’s starting to replicate international games, it’s the same tempo and standard we’re playing at which is what we want.

“We want it to be the best Premiership, we want us to be the best players out there, it’s great for us and we just want to get better at that intensity.”