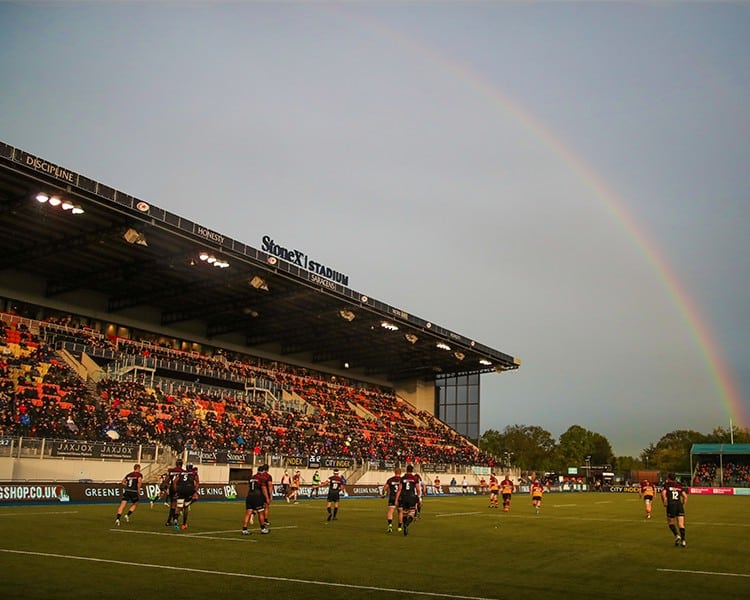 “It has been just over a year since I last did notes for the programme – our last home game before the start of the pandemic.

What a year.  No one reading this needs me to tell them how dreadful it has been.

Anyway, I wanted to use this slot to concentrate on some good news stories as the country – hopefully – returns to something approaching normality on June 21.

First, it was fantastic to get at least some fans back in the stadium for the Ampthill game.  It was a great atmosphere and the players were very excited to be back playing before a crowd.  It has been great to see the extent of the loyalty and support from the fans during what on any view has been a pretty challenging year.

Next, great to see that we have five players in the Lions squad.  To get more players in the squad than any other club in a year when we are playing in the Championship is a testament to our coaching team as well as to the players themselves, although it is obviously very disappointing that Billy missed out.

Third, some very big games coming up.  The Women’s team are in the final against Quins on Sunday after a strong win against Loughborough in front of over 1,400 fans last Saturday.  I watched the league game against Quins earlier in the season – a draw with the last kick of the game – so I doubt there will be much to choose between the two teams.  The Men have secured a place in the play-offs – and if we can get a 5 point win in the last game of the season, we will top the Championship.  At the risk of stating the obvious, the play-off games will be very significant and it is nice to see a couple of players returning to the fold to strengthen the squad in anticipation of them (Nick Tompkins from Wales and Alex Goode from Japan). Let’s get right behind our Men and Women as we enter the real business end of the season.

Finally, immediate playing issues aside, a short note on what has been going on behind the scenes. Like all clubs, the absence of crowds meant a significant drop in revenue. We were able to mitigate some of the effects of this by taking advantage of the furlough scheme, all our players and staff accepting a pay reduction and getting a long term loan from the government on very favourable terms. This was in addition to the fantastic loyalty shown by our Seasonal Members, which was invaluable. A lot of work has been undertaken to ensure that the club is on a sound basis financially going forward, and our management team are doing a great job – Lucy Wray as Chief Executive Officer alongside a fantastic executive team. Justin Le Fort has recently joined the team as Chief Finance Officer. The work on the new stand has started and is proceeding apace – with a completion date of July 2022, it will be no time before that is completed.  In addition, a lot of work has been done with the coaching team to plan for the shape of the squad for next season and beyond.

All in all, I am very confident that, while this season has been very challenging, we are coming through it in pretty good shape both on and off the pitch, and I am very optimistic about the future.

Many thanks as always for your ongoing loyalty and support.”