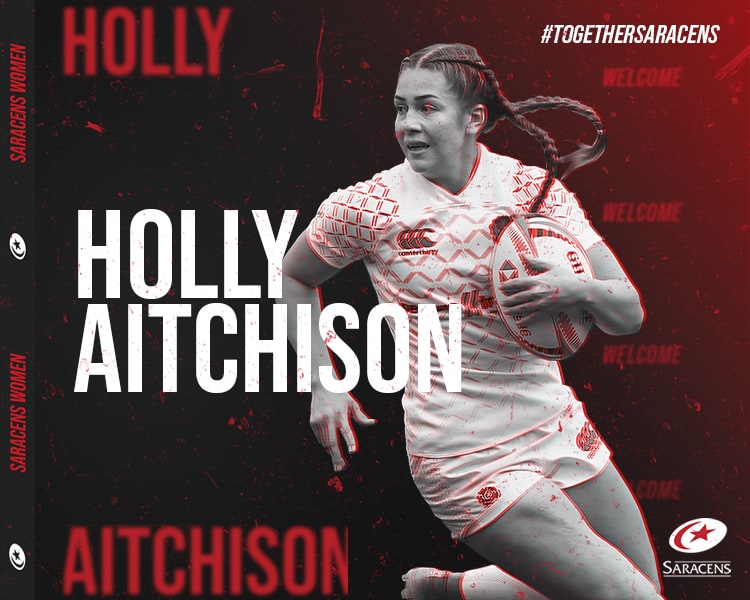 The 22-year-old has bags of experience on the World Series since switching XVs for Sevens in 2016.

As a junior, she played rugby at Waterloo with a boy’s side and had one season with the club’s Under-15s before switching to Liverpool St Helens.

A switch to Lichfield followed which coincided with her focusing on rugby whilst attending Hartpury College.

Aitchison was in the England Talent Development Group from 12-years-old and earned her England Under-18 Sevens debut on her 16th birthday before earning caps in XVs for the Under-20s.

“I’m absolutely delighted to have signed at Saracens,” Aitchison said.

“Having been part of England Sevens since 2016, I’m not sure many players would have walked away from the programme expecting to be given the opportunity to join a double Premiership-winning side, so I’m super excited to get back into XVs and get started.

“The opportunity to be part of a squad with an abundance of internationals, where I would be challenged every day, was something that was massively important to me. The chances it’s provided to bring me up to speed quickly is something I’ve really appreciated and having played with numerous members of the side at college and international level already, I knew Sarries would be a great fit for me.”

Head coach Alex Austerberry said: “Holly is a player full of quality and she has displayed that during her time with England Sevens.

“I have seen Holly develop from an exceptional young talent with great potential to a player who influences big games on the biggest of stages. I am genuinely excited by having the opportunity to work with her and seeing what she will bring to the group and where her game can go in the XVs format of the game.

“She has a very rounded skill set and is a player who can unlock defences in multiple ways. She will add to an already talented group and that is exciting for everyone at the club.”