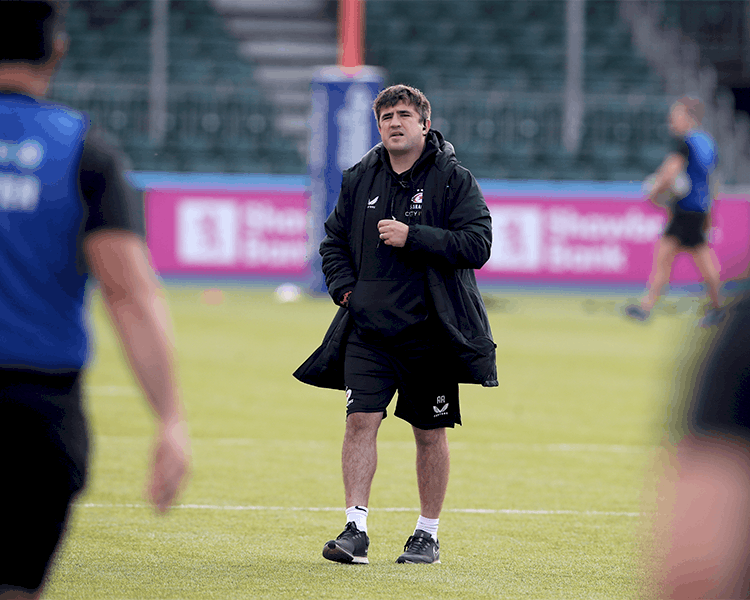 Alex Austerberry should feel very proud of his regular season league record with Saracens Women in the Allianz Premier 15s.

But, as we all know, there are statistics, statistics and damn lies. Add in a further six play-off matches, only one of which was lost, and it is a remarkable record. Yet the trophy cabinet is currently empty after defeat to arch-rivals Harlequins last season.

That is something the 37-year old Austerberry is dedicating himself to changing this season and the signs are very encouraging. Bristol Bears are the only other unbeaten team in the league and they are just ahead of Sarries thanks to a better points difference.

Austerberry came in to replace Rob Cain, when he went off to coach the USA Eagles Women’s team, and was charged with defending the Premier15s title secured in 2018. He ensured it stayed at the club throughout an exceptional 2018-19 campaign, in which only one game was lost, and looked odds on to retain it the following season before COVID interfered.

With a perfect 12 wins from 12 games, Sarries looked unstoppable once again. Lockdown put an end to the dream of another title triumph, although it was business as usual last season as Austerberry’s side marched into another final against Harlequins.

Having beaten Loughborough Lightning 28-24 in a tense semi-final, it was Quins who came out on top at Kingsholm in the final, winning 25-17. It was tough to take, but there have been no backward glances from Austerberry.

“The summer gave us the chance to reflect on another successful season, although one that didn’t go for us in the end with the defeat to Harlequins in the Premier15s final,” he said.

“The key question was how do we convert that disappointment into something positive and go one better this season? We only had a three-week close season and then the players were right back into it.

“We brought in a few new faces, held onto a lot of fan favourites and I think we are currently in a really good place. We have hit the ground running this season and it has been great having Juan Figallo join the coaching team.

“Tom Haynes is heading up our strength and conditioning programme and James Tirrell has come in to provide extra support with our back line coaching. There is a lot of expertise behind the scenes that is helping the players further develop and push to reach their true potential.

“We have world-class players in our squad who could become even better, and there are youngsters who are capable of producing jaw-dropping moments. I’m working with people who impress me day in, day out with their dedication and passion.

“There is such a desire from all of them to work hard and perform at their best for the club and their team mates. That said, there are also times when they p*** me off!”

Austerberry left his role as Performance Pathway Officer at the RFU to return to Saracens, where he had first worked with the women’s team in 2010. Prior to that he had worked with the club through the Saracens Sports Foundation from 2006 and then moved onto the Men’s Academy.

Coaching is his passion and developing a true high-performance programme for the Saracens players is his goal.

“It is a real privilege working with players who are aspiring to be the best they can be. They are highly skilled athletes playing the game at the highest level there is in the northern hemisphere,” added Austerberry.

“It is different to the men’s game, but that doesn’t make it any worse. We have full-time athletes in our programme all the way down to assistant head teachers who train when they can,

“The last year or so has been the most difficult time I’ve had as a coach because of all the restrictions and challenges posed by COVID. I learned a lot about myself and my team over that period.

“It feels like we have a little bit more room to breathe this season, although we are still taking all the necessary safety measures. One of the biggest losses over the lockdown period was not as many people got to see our product.

“Over the next 18 months to two years we have to take the game forward in order to lay the foundations for future generations. There is work to be done on recruiting more young girls into the sport, but at least now they have some good role models to inspire them and to learn from.”

Many of those are already Saracens players and Austerberry is hoping more stars will emerge from his squad this season. So far, so good!