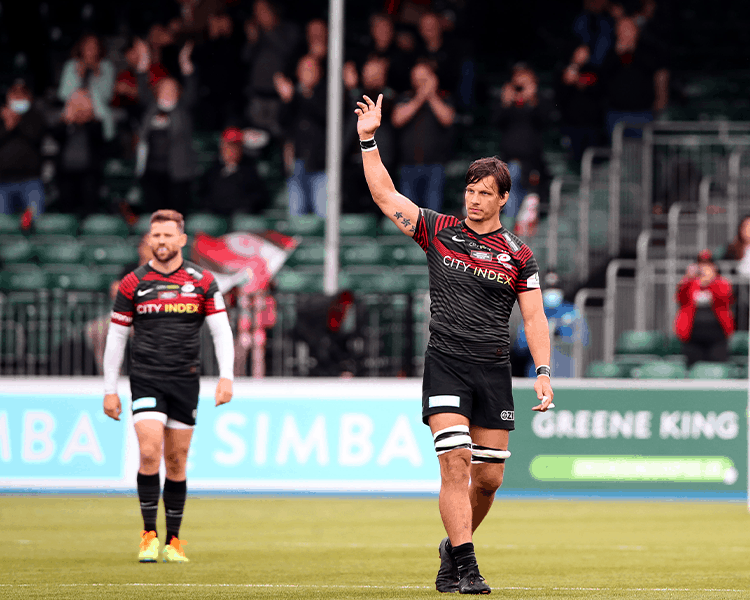 When the success of Saracens over recent years is looked back upon, amongst all of the international superstars there is another name that is held in supremely high regard, and that name is Michael Rhodes.

The South African’s career at StoneX Stadium came to an end after the second leg of the play-off final against Ealing Trailfinders, which ensured that Sarries will be back in the Gallagher Premiership next year.

Rhodes has been a stalwart of the club for the last six years, making 106 appearances and winning three Premiership trophies as well as three European Cups during that time.

Looking back on a whirlwind spell at Sarries, Rhodes believes that working alongside the coaching staff transformed his game.

“I’ve grown hugely since I arrived here. The coaches have really helped me on the technical side of the game, and playing in a team full of world class players raises your game naturally so it’s a testament to the environment that it makes you better.“

A fan-favourite for his tireless performances, Rhodes started his career with the Sharks in his native Durban before featuring for the Lions and the Stormers in Super Rugby ahead of his move to North London.

In his debut season he started both the Premiership and Champions Cup Finals, the first European title in the history of the club, and admitted that his new surroundings were different to what he was used to.

“It’s very different from what I experienced in South Africa. Saracens is such a welcoming club, for example I had Nigel (Wray) sending me hand written letters before I arrived and lots of calls from the coaches to make sure I was happy. It’s so easy to get along with all the players, it’s a great environment and there’s no hierarchy stigma at all.”

The next campaign he was named Players’ Player of the Year as Sarries retained their European crown at Murrayfield by beating Clermont in the final, and the semi-final against Munster is one that he cherishes.

“The away match against Munster was just unbelievable. It’s always special playing in Ireland and especially with my family in the crowd as well.

“It’s easy to highlight the finals, there have been a lot of games where we’ve been under the pump and then scraped a win so it’s been amazing to be part of this wonderful team.

“We’ve had a lot of praise for the trophies but actually there has been a lot of other games where just through the character of this group we’ve got the win, and those are the moments that we hold dear.”

The Saracens culture is held in high regard across the sport, and Rhodes gave an example of how much it has meant to him.

“My family have been hugely happy here. Everyone gets together, and off the field they have felt at home just like I have. The club puts a lot of emphasis on these kind of things so I have to thank them for that.

“I’ve had my two boys here and they absolutely love coming to training. They know all the lads by their first names and feel like they are mates which is amazing. There are quite a few of us with kids so it’s nice for them all to be together.”

The impact that the flanker has had on the Men in Black was summed up by Director of Rugby Mark McCall, who admired his work rate week in week out.

“Perhaps the biggest compliment you could pay Michael Rhodes is, if you asked our players who they’d most not want to play against in our team, it would be him!

“The definition of physical on both sides of the ball, his relentless work rate and full throttle approach to the game have made him a central figure in all the club has achieved.

“Off the field, he is a devoted team-mate and family man who has time for everyone and a deep affection for the club.  We wish him, Cara, Jack and Tommy well in all that lies ahead. Thanks Rhodesy.” Said the DOR.

Rhodes’ partnership with the likes of Jackson Wray and Billy Vunipola in the back-row has been a significant part of the success at StoneX Stadium in recent years, and he became a centurion during the Trailfinders Challenge Cup in February.

Being one of the most experienced players in the squad meant that he has seen it all in a Saracens shirt, and he had plenty of people to thank.

“It’s been an amazing time. On the field the club has been very successful and I’ve been part of some great times so it’s been an unbelievable experience. I’ve played in some unforgettable places, and rugby wise it has been second to none so I couldn’t have asked for any more.”

He continued: “There are too many people to thank but I’ve been extremely lucky to have played with such a high quality team and I’m eternally grateful for being a part of this.

“The coaches have played a huge role and helped me to develop and get the best out of me. The medical staff have kept me going one way or the other and pieced my body back together.

“I want to say a massive thank you to the fans for the way they have welcomed me, the away support all over Europe was incredible and recently they have stuck behind us in tough times.

“The biggest one is to the players. It’s an unbelievable privilege to come to work every day with your mates. I’m lucky to have been a part, it’s meant a lot to me and my family and I will never forget them.”

Rhodes has epitomised everything about the club over recent years, and whoever takes his place in the back-row will have big shoes to fill as the Men in Black head back in to the top flight of English rugby.