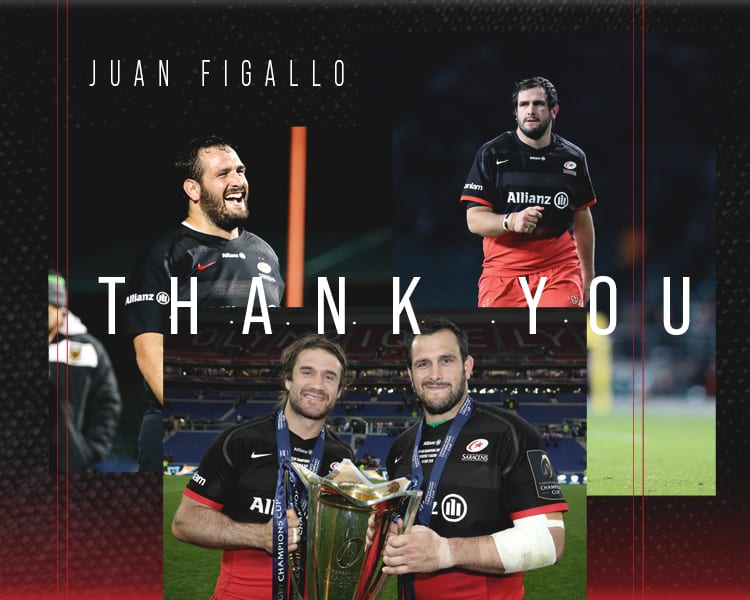 Figallo announces retirement after six years as a Saracen

Juan ‘Chipi’ Figallo has had to call time on his rugby career at the age of 32 through injury, bringing to an end a memorable six years as a Saracen.

The front row sustained a head injury playing for Argentina at Rugby World Cup 2019 and has taken the decision to retire on medical advice.

Chipi joined Saracens in 2014 from Top14 side Montpellier and made 96 appearances for Sarries largely during the most successful period of the club’s history.

He also won 33 caps for Argentina and appeared at the Rugby World Cup in 2011, 2015 and 2019 for Los Pumas, winning the last of those caps against England in Tokyo.

“Juan epitomises everything it takes to be a good teammate.” – Mark McCall.

In his first season with the Men in Black, Chipi played crucial roles off the bench in both the Premiership semi-final and final on the way to the club’s second domestic title.

The following season he was called upon in both the Champions Cup final against Racing 92, the club’s first European triumph, and the Premiership final against Exeter Chiefs a few weeks later.

Another European success followed in 2017, while the Argentine had an immeasurable impact both on and off the pitch as Sarries won the Premiership title in 2018 and the double to crown a fantastic 2019 season.

Director of rugby Mark McCall said: “Juan epitomises everything it takes to be a good teammate. A brilliant performer on the field, he has led the way in what tight head props are capable of.

“Off the field, Chipi struck a perfect balance of always pushing to improve his game and having fun with his teammates. He has been a great example and mentor to our younger players.

“We wish Juan, Trini and their family well for the future and thank them for their enormous contribution to our club.”

Chipi always contributed all he could to the club, both on and off the field and in the last 12 months has been an incredible role model for the club’s talented young front rowers.

Ian Peel, forwards and set-piece coach, believes Chipi’s influence will be long felt at the club and hailed the prop’s ability to showcase the values of the club in everything he did.

“As existing members of Saracens, Chipi and his wife Trini went over and above to welcome my family and I to the club when we joined, something that has really stuck with us,” said Peel.

“He epitomised the clubs values, building strong relationships on and off the field, whilst working incredibly hard on his own performance. His drive and ambition to improve never dwindled even throughout periods of injury. He wanted to maximize his own potential and always encouraged and assisted others realise theirs too.

“Enjoyment was at the forefront of everything Chipi did on and off the field which ultimately helped to bring out the best of those around him. He has been a pleasure to work and socialise with, and he and his family are going to be hugely missed.”