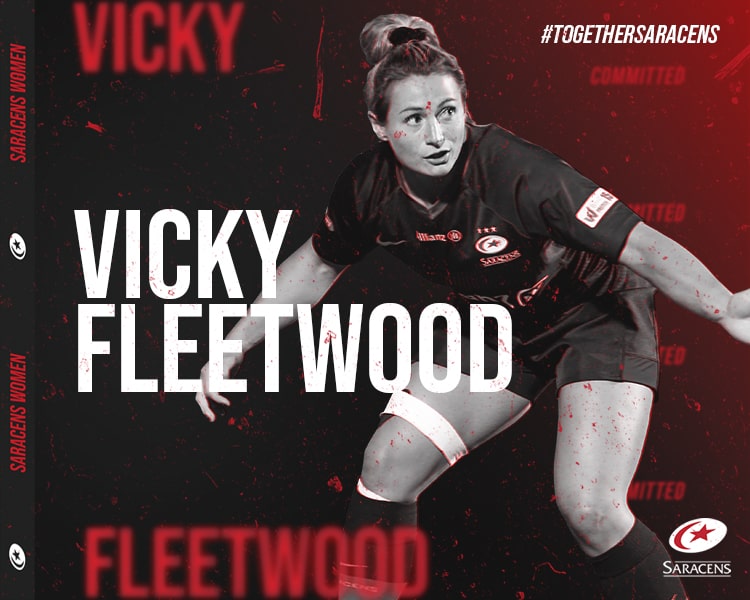 Saracens Women is delighted to announce Vicky Fleetwood has committed herself to the club.

The 30-year-old re-joined Alex Austerberry’s side ahead of the 2018/19 and played a key part in the Women in Black retaining the Premier 15s title that season.

Her first spell came after winning the 2014 Rugby World Cup with England, and a year later she had made earned over 50 caps for her country aged just 25.

In the same year, the Commonwealth Games medallist became involved in the England Sevens programme and went on to represent her country at the 2018 Sevens World Cup in San Francisco.

Equally adept at hooker and flanker, Fleetwood is excited to continue her journey at the club and is relishing being back in the environment.

“Fleeto has a great work ethic and an engine that allows her to play at a fast tempo.”

“I’m really looking forward to getting back to playing with Saracens,” she said.

“As a squad, we were in a great place when the season finished and our aim is to continue that good form into this season. Everyone is enjoying being back together and is putting the hard work in.”

Head coach Austerberry said: “An established international in both formats of the game and a World Cup winner, some people might be surprised when I say her performances and levels of consistency last year were the highest I have seen.

“Fleeto has a great work ethic and an engine that allows her to play at a fast tempo and generate pressure on the opposition through relentless line speed. A devastatingly quick and powerful runner who finds mismatches and creates line-breaks, Vicky is a handful for defences.

“Her experiences and her professionalism set the benchmark for all other players and all that work pays off with the performances she puts in. A very talented player, who is equally as comfortable in space or in close quarter battles; it will be great to see her in a Saracens shirt again this season.”