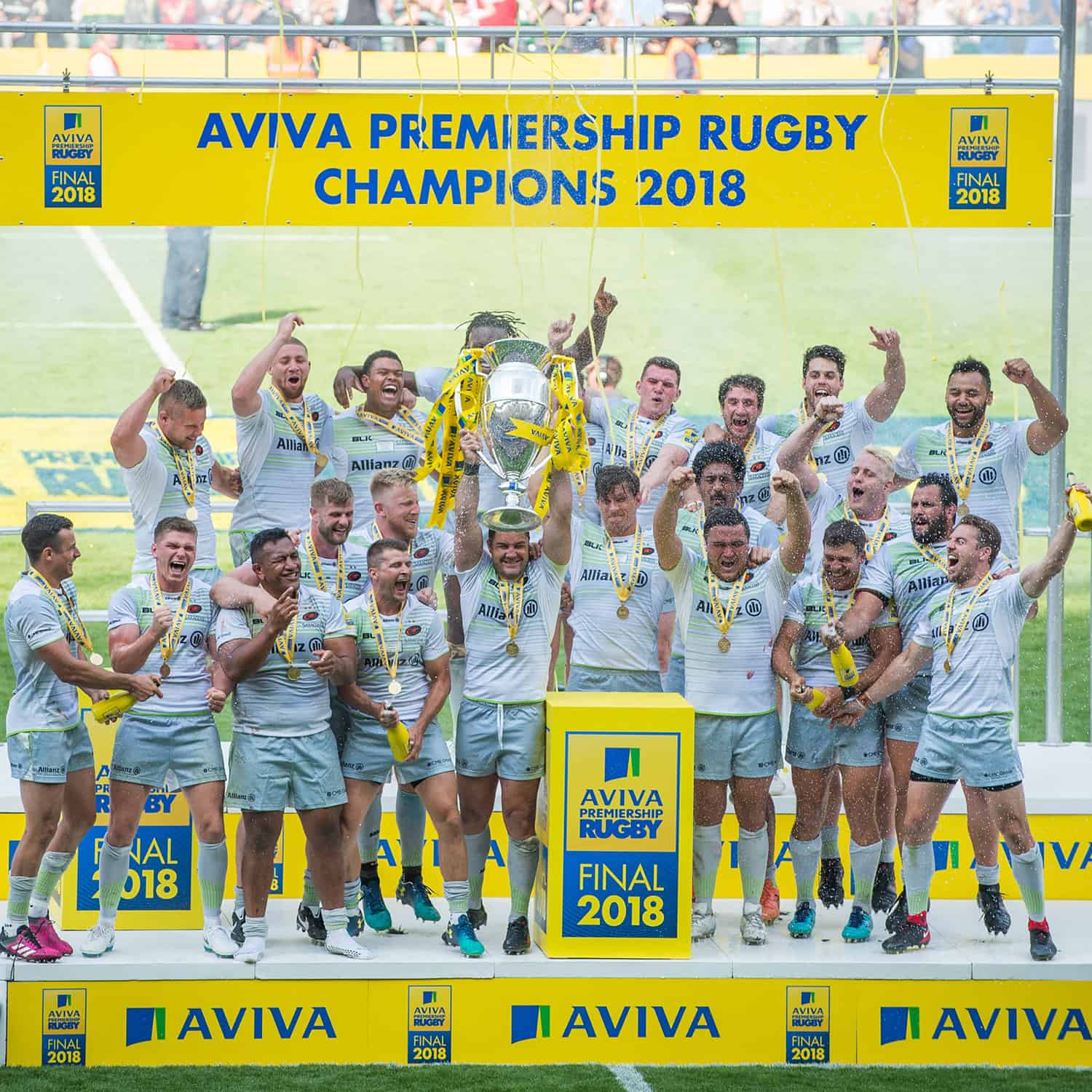 Two Chris Wyles tries in his last game before retirement and scores from Billy Vunipola and Nathan Earle won it for them after a sluggish start.

Gareth Steenson scored Chiefs’ only try as Sarries survived losing Schalk Brits to the sin-bin in the closing quarter.

In a repeat of the 2016 showpiece, Saracens took the trophy in their fourth final in the past five years.

Exeter, who finished eight points clear of second-placed Saracens in the regular season, could not build on a dominant opening 10 minutes where a solitary penalty from Joe Simmonds was all they had to show for it on the scoreboard.

As Saracens looked set for a difficult afternoon, Mark McCall’s side turned the game on its head with two tries in the space of four first-half minutes.

Number eight Vunipola put an injury-disrupted season behind him with their first try before USA international Wyles was set free from 20 metres out by quick hands from Alex Goode and Sean Maitland.

Exeter hung in the contest, going in at the break 12-3 behind, but Wyles’ second score seven minutes after the restart put Saracens 16 points clear.

After hooker Brits was shown a yellow card in his final Saracens appearance, all Exeter’s numerical advantage could produce was Steenson’s score from close range.

Replacement winger Earle, who departs for Harlequins in the summer, then exploited tired Chiefs legs to add a fourth try in the closing moments.

At times this season, a fourth Premiership title might have seemed a far-flung prospect for Saracens.

During a difficult spell in November and December, McCall’s men lost seven successive matches in all competitions.

But they found a hot streak of form in the closing third of the campaign and a clinical knack for beating teams when not exactly at their free-flowing best.

The timely return of Billy Vunipola from another injury set-back, plus a reinvigorated contingent including Mako Vunipola, Maro Itoje and Owen Farrell, after a disappointing Six Nations campaign for England, gave them the added edge in play-off rugby.

That big-game experience was also epitomised by the likes of Wyles, Brits and scrum-half Richard Wigglesworth, who became the first player to win five Premiership titles.

Exeter made a dominant start to the final in all facets except for on the scoreboard.

While they enjoyed a relentless spell of possession and territory in the first 15 minutes, they only had one Joe Simmonds penalty to show for it.

The young fly-half, chosen ahead of Chiefs veteran Steenson, also missed a second, seemingly straightforward, attempt on a breezy afternoon.

Despite that miss, everything seemed to be heading in the men from Devon’s direction as Saracens had just 1% possession in their nightmare start.

But that was to be the last time Chiefs found themselves both in the ascendancy and in the lead as the Saracens storm began to brew.

In-form players such as number eight Sam Simmonds and flanker Don Armand failed to impose themselves on the contest.

Baxter’s frustration was evident as he made a raft of changes 10 minutes into the second half, including removing fly-half Simmonds from the action.

It was a disappointing end to the season for Exeter, who failed to execute their possession-based strategy on one of the hardest-working defences in Europe.