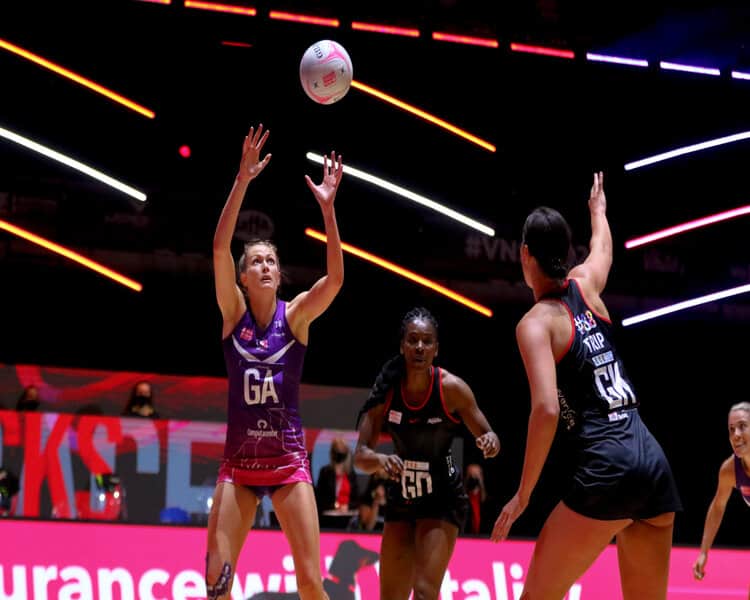 Friday Night Thriller in London in a close matchup

Friday night saw a thrilling match between Saracens Mavericks and Loughborough Lightning, in a tight goal for goal match. Both sides played with confidence, which surely had fans on the edge of their seats at home throughout most of the game.

The first quarter started well for Lightning, who took an early lead. Mavericks did not accept this and Jo Trip took several interceptions which were turned into goals at every opportunity. Neither team let up the pressure, going goal for goal, with Mavericks taking the quarter by one goal.

Mavericks kept the momentum going in the second quarter, capitalising on every opportunity. Lightning kept the pressure up, taking a 4 goal lead at one point. Mavericks pulled it back and the side kept the momentum going. Jodie Gibson took several flying interceptions, making a huge impact for Mavericks. There was nothing to separate the sides in terms of skill and pressure. The half time score was 27-27.

Mavericks took control for most of the third quarter, taking the lead by 5 goals at one point. Their connections through the court have started to come together as they played with flair and confidence. Lightning did not let this get them down, coming from behind and taking the quarter by two goals.

Lightning applied the pressure in the final quarter and they quickly extended their lead. Kat Ratnapala made several changes but they did little to stop Lightning. The close match came to an end with Lightning winning by 8 points with a final score of 47-55.

Mary Cholhok was awarded the Lucozade Sport VNSL Player of the Match, for her sharp shooting throughout the match.

Jodie Gibson and Jo Trip were awarded our Saracens Mavericks Coaches Players of the Match for their defensive teamwork throughout the match.