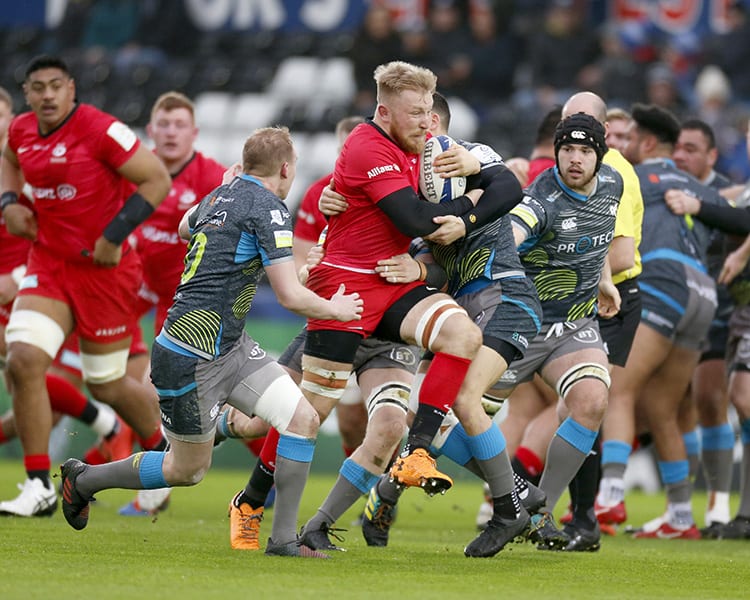 Jackson Wray echoed scrum-half Richard Wigglesworth’s words of being proud of the playing group for the performance put in against Ospreys.

Saracens went down to 14 men early on and then 13 for a period but battled to secure victory at the Liberty and keep hopes of a Heineken Champions Cup quarter-final place alive.

Game management, effort, physicality and a real unity all contributed to the result and captain Wray believes it showcased the tightness of the squad.

“After they scored I was unbelievably proud of the way we went about our next action and then what came to follow.”

“It’s making sure everyone is on the same page as quickly as possible,” he said.

“I think we did very well to do that especially in the second half. After they scored I was unbelievably proud of the way we went about our next action and then what came to follow.

“The forwards were so good in terms of taking a lot of load as we knew that was going to be a massive part of the game anyway and when the red card came it was even bigger. In that sense we controlled the pace of the game really well, especially up front with some of the dominance we were able to get.

Purchase your tickets for Saracens vs Sale Sharks - our next Gallagher Premiership home match!

“Then it was about working hard and working smart to not give them edges, to not give them holes through the middle without fighting. They did get breaks but they were going to because of the space but it was about how hard we could fight back to get a bit of momentum, get another set piece as we knew that would win us the game.”

Wray continued: “We’re a tight group and games like that only make us even tighter.

“That’s probably the proudest thing; we were able to come to a tough place with a young side, lose a man early on, lose a second man and still be able to put that performance out there.

“It was full of effort, full of fight and full of composure as well.”