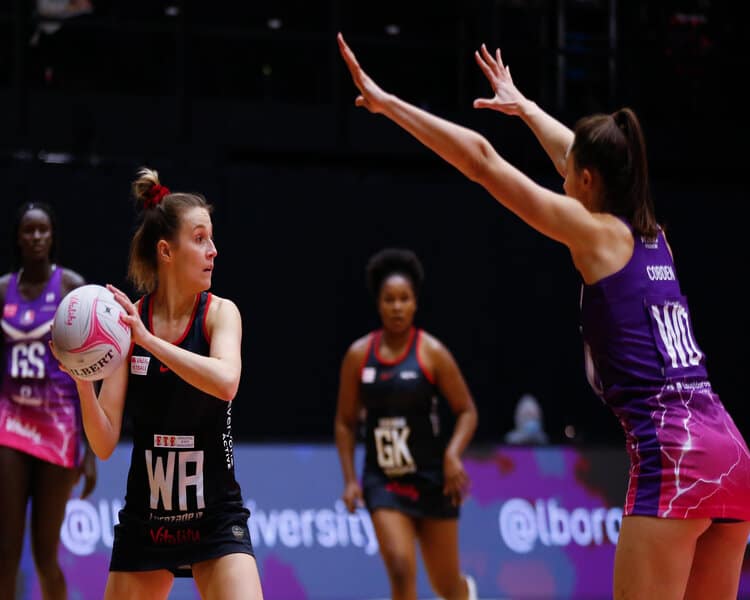 Georgia Lees: “Working on COVID wards whilst playing netball was a huge challenge”

During the COVID-19 pandemic, the National Health Service (NHS) has taken a greater presence in everyone’s daily lives.

The NHS and it’s staff members have been a mainstay in the news over the last 12 months as they look to help us recover some sort of normality. Those on the front line have been appreciated in the form of Clap for Carers and on social media, but the real reason they do it isn’t for appreciation.

This is the case for Saracens Mavericks’ Georgia Lees who only started working in the NHS during the middle of the pandemic.

The wing attack has had to mature quickly just months after completing her studies to ensure she can help those in need to assist her colleagues in hospitals. She had studied Sports Science at Brunel University and stayed on to do a Masters in Sport, Health and Exercise Sciences before working for Bupa for two years. She has since studied to be a Physician Associate at the University of Hertfordshire. Recently, Lees has been working in A&E as a Physician Associate and has found the situation rewarding even if a little hectic.

“I’m currently working in A&E at the Luton & Dunstable Hospital and that’s where I did my training as a student and was just very lucky to be kept on there afterwards. I thoroughly enjoy it and every day is different. The past few months have been more of a challenge. Coming straight out of being a student into a pandemic where you’re working in healthcare, you get thrown in the deep end and you swim or sink.”

“So, for me actually that’s been a good learning experience because the opportunities I’ve given because they’re short on staff or there’s more patient load than normal, you have to step up and take those opportunities when they come. So, for me as a person who’s newly qualified, it’s actually been a really good experience for me and I’m quite happy it’s worked this way out in a way.”

The former Surrey Storm player has won two Vitality Netball Superleague titles and has impressed in the early stages of the 2021 season with Mavericks. The 27-year-old has provided some of the most impressive moments of Mavericks’ great start and is managing to do so while balancing her career with her netball.

“So, when I was studying, it was much easier to manage because obviously everything was on campus, everything was on site. It was hard to manage with the placements and their deadlines with training, that’s when I found it quite tough. Now I’m in a contract at work, I’m in a contract with Mavericks as well so it’s quite tricky to juggle. This week, I was literally running from my car to training as I finished work just 30 minutes before but it’s just been manic at the minute.”

“I’m really lucky I’ve got a lot of support and I’m living at home with my parents at the minute whilst we’re saving for a house, so my mum’s really good at making sure I’ve got everything I need and it kind of feels like I’m back at school again trying to juggle everything. It’s tough but I’m just kind of used to it now, so it’s just become one of those things.”

The stresses that might come with balancing the two pale into comparison when it comes to the rewards working in healthcare bring. For example, Lees was able to update family members on the conditions of their relatives while they are unable to visit due to COVID-19 restrictions.

“It’s been really rewarding, it’s a tough job but I’m really privileged that I’ve had that opportunity. It’s a very rewarding job, not all the time, but nine times out of ten your patients are always very happy with you that they get to go home and you’ve helped them to get better. I remember when I was a student on the COVID wards and what I found really really tough was coming to terms with these patients that couldn’t have their relatives with them. I found that as a concept really hard to come to terms with even though I knew it was the best thing for stopping the spread and protecting their relatives.”

“So we used to just call the relatives just to give them an update because the doctors were so busy, the nurses were so busy because they had all these other jobs that they needed to do that we couldn’t go because we weren’t qualified. What we could do was just ring their wives or ring their daughters or their sons just to give them an update, even if it wasn’t anything to say they’ve made a huge turnaround and they’re better. It was just to let them know that they’re okay or at times to let them know that they have got worse but at least they’re updated with that. It makes the world of difference.”

With all games on Sky Sports and following the success of the Vitality World Cup 2019, netball has never been in a better place in the sporting landscape as has women’s sport in general.

Lees feels the same way about gender roles in the NHS. No longer are men associated with doctors and women with nursing.

“I think that is a changing issue within the NHS, I don’t think it’s quite there yet. Last weekend when I went in for my shift, at the front desk in A&E there were just five girls sitting there, two of which were doctors, there were three Physician Associates. It’s definitely something that I think is identified within the NHS, people are quite aware of it. I’m lucky enough to work with some fantastic female consultants who are at the top of their game. There are females working within those top positions whether it be consultant or a senior nurse or matron, they are definitely working within those positions which is fantastic to see.”

“I think sometimes I’ve had barriers before with patients who will only want to be seen by a male doctor and that’s quite disheartening to hear because you think well, we’ve just done exactly the same training. I definitely think it is an ongoing issue within the NHS but, luckily for me, it’s not something that I feel like I face every day or I feel like I’m at a disadvantage because I’m a woman and I do have those role models there within my workplace, who are in those top, senior positions and who are women.”

On International Women’s Day, Lees feels it’s important to recognise the impact that role models like her can have on upcoming netballers. Lees – who chooses to challenge the fact you can’t strive for a career and a pursue sport at an elite level – has reached out to those younger than her seeking for advice through charity and community work.

“I have had a few messages through social media of girls at that age of 17 to 18 where they’re looking to go to university but they’re kind of at that NPL level with their netball or regional level with their netball. They don’t want to give it up but they want to go to university and their focus is their studies but they want to play sport alongside that. I’ll always be honest with them and say it’s not easy, it is really really tough. There will be times where say you’ve got a Superleague game at the weekend and you’re at university and you’ve got a deadline that’s due. You can’t do it all.”

“If you see women having success then it inspires young girls to know that they can also have success whether it’s in sport or any other area of life. To have female role models in the media with their successes being celebrated is important for young girls growing up.”

“For us, that responsibility sits quite heavily on our shoulders to make sure that we are promoting ourselves and the sport and ourselves as athletes in the right way. Netball is huge for that and it’s important that it’s getting seen on Sky because it’s a weekly source that young girls can tune into to see their sporting role models.”