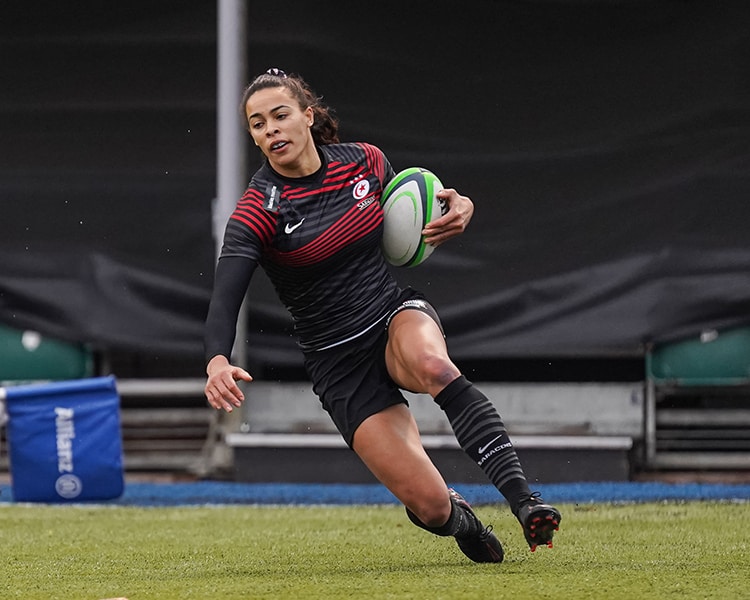 Great to be back – Fleming

Saracens Women winger Deborah Fleming marked her return to the starting XV in style by scoring two tries in a resounding 72-0 victory over DMP Durham Sharks on Saturday.

The 29-year-old lined up in the 11 jersey for the first time since re-joining Sarries from the England Sevens programme in the summer and sped home twice in the second half as Alex Austerberry’s side crossed the whitewash 12 times to make it three bonus-point wins in a row.

Fleming featured for the whole 70 minutes in Round 3 and was grateful to be able to showcase her talents.

“It was really great to be back on the pitch,” she said.

“I was just really biting at the bit to get out there, to be part of the team and to show what I can. I’ve been building some really good relationships and I think that showed on the pitch.

“I’m really happy to have come away with two really great team tries and just be out there with the squad. It’s a great feeling.”

“I was just really biting at the bit to get out there, to be part of the team and to show what I can.”

Sarries sit joint-top of the Allianz Premier 15s table alongside London rivals Harlequins after picking up maximum points in their first three matches of the 2020/21 campaign.

Despite being in good form, Fleming insists there are areas of improvement for the squad to address ahead of their trip to Gloucester-Hartpury in the first week of November.

“It’s a positive that there’s still more to work on even though we’ve been managing to get wins and doing it in different ways.

“We’ve made it a little bit difficult for ourselves at times, but we’ve had the character and the strength and depth in our squad to come through in the end.

“I think we have put in some good performances, but I think we’ve left a lot out there still which I think is really exciting for Saracens.”