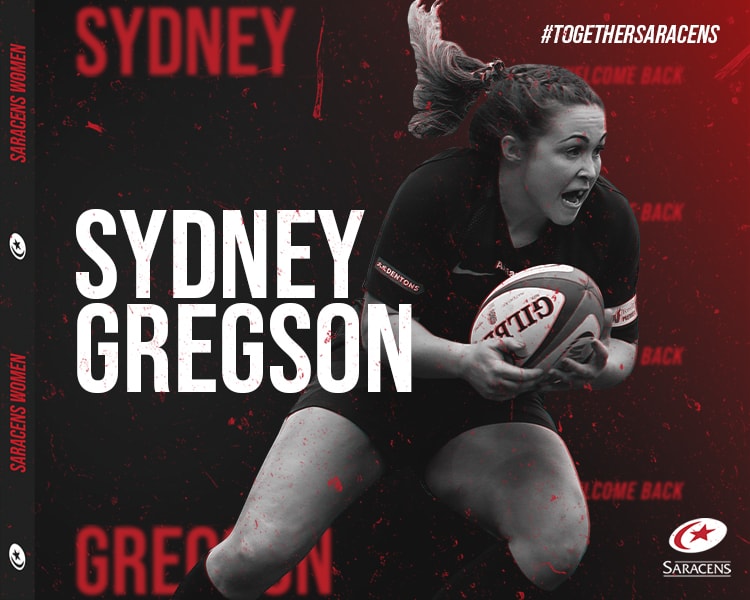 Saracens Women is delighted to announce Sydney Gregson has returned to XVs with the club.

The 24-year-old originally joined the Women in Black in 2018 after a short stint playing at the University of Sydney before linking up with England Sevens in 2019.

She was capped at XVs level by England prior to her arrival at Sarries and made her debut in a victory over her former club Bristol Bears.

“I’m delighted to sign back at Saracens and to be back with a really special group.”

Her dynamic ball carrying and aggressive defence saw her gain a starting spot towards the end of her first season, including a run out on the wing the 2018/19 Premier 15s final.

Gregson scored in the victory over Harlequins as Saracens recorded back-to-back domestic titles.

“I’m delighted to sign back at Saracens and to be back with a really special group,” she said.

“I’m excited for what the season has to offer and can’t wait to get stuck in with the team.

“It’s a really competitive and professional environment where I know I will continue to develop and relish the opportunity. It’s a big season ahead but I’m really looking forward to the challenge. I love being at the club and I’m grateful to be part of it.”

Head coach Alex Austerberry said: “Sydney is a local girl who grew up playing at Welwyn. Her links to Saracens go back to her days as a junior and returned to the club during the 2018/19 season and was part of the side that won the league.

“This earned her selection into the England Sevens programme. A powerful player who makes impacts on both sides of the ball, Sydney has the ability to play in the back three and in midfield.

“She is entering her prime as a player and her growth and development since making her debut as for the Red Roses in 2015 shows how much potential and talent she has. It is great to welcome back a local Saracen to the family and I have no doubt she will make a great impact on our group.”