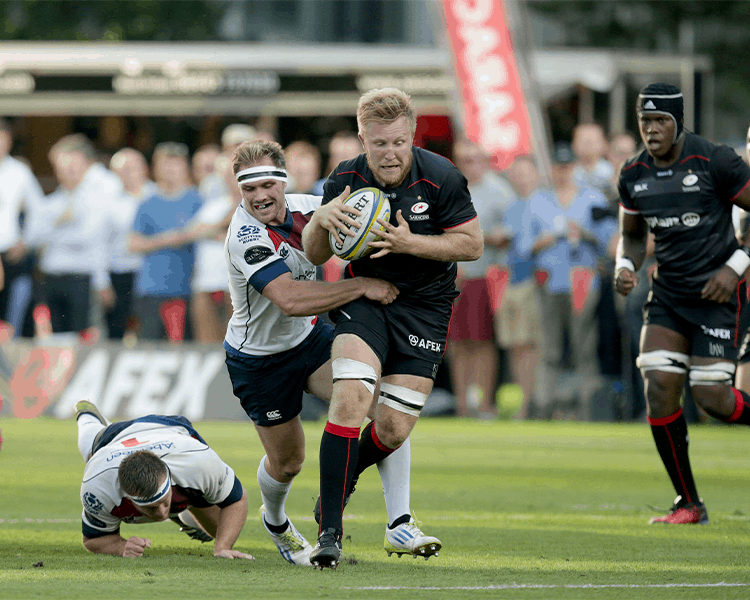 With 262 Saracens appearances to his name Jackson Wray has experienced pre-season plenty of times, and with the upcoming return to the Gallagher Premiership fast approaching there is always one event that he looks forward to before the start of the campaign.

Wray has featured in five of the annual ‘Saracens in the City’ matches held at the Honourable Artillery Company, this year presented by City Index, and he can’t wait to get back in to action on Thursday September 9th.

This is the ninth time that Sarries will be playing at this iconic venue, and with Wray playing in over half of them he is well placed to discuss why it is so popular for the players.

“You definitely don’t normally play in a place like that so it’s very different in that respect. Being bang in the centre of London and having all those landmarks around it gives it a special feel.

“The crowd is always great, people are enjoying themselves and have usually had a few drinks by the time it gets to kick off so it’s always a good atmosphere!”

The 30-year-old is aware that HAC tends to fall just before the league gets underway, which he says gives it real significance amongst the squad.

“It’s been a staple in our calendar and it’s always very close to the start of the season so you know it’s a big occasion. It’s our last hit out before the first league game so it’s important for us to make sure we’re ready to go.”

The former England under 20 has faced plenty of opposition on City Road, and he says that a win over their counterparts from Swansea was one of the most enjoyable.

“The Ospreys is one that stands out. It was a good win and we played very well which set us up en route to a couple of trophies that season. We’ve played a real variety of teams there and I’m sure Ulster will be another good game.”

With Ulster making the trip over to London this time, to take on a European heavyweight is ideal preparation for Sarries.

“They’re obviously a really good side so it will be a good chance to see where we’re at. We’ve only got the two main hit outs for pre season so it will set us in good stead.”

There is a lot of intrigue around how Sarries will fare this season, and Wray gave an insight in to how the squad are preparing for the Premiership.

“We’re all so excited. There is a great atmosphere around the place and the standard has been really good. There is real hunger from the squad and we can’t wait to test ourselves in the top tier once again.”

With one eye already on the opener in Bristol on Friday 17th September, the flanker says the first few matches will be special for everyone.

“Night games are always good and I’m sure Ashton Gate will have a good crowd in so it should be a belter. Those games can bring the best out in us so we’re all just so excited to get going.”

He added: “That first home game will be amazing. It was really special to even just have 2,000 in towards the end of the season, so I can’t even imagine what it will be like when StoneX is full again!”

Wray will be looking for another positive evening in Central London, a result that has often launched the Men in Black towards a successful season.

There are still limited places remaining in the Legends Lounge, click here to be part of Saracens In The City, Presented by City Index.