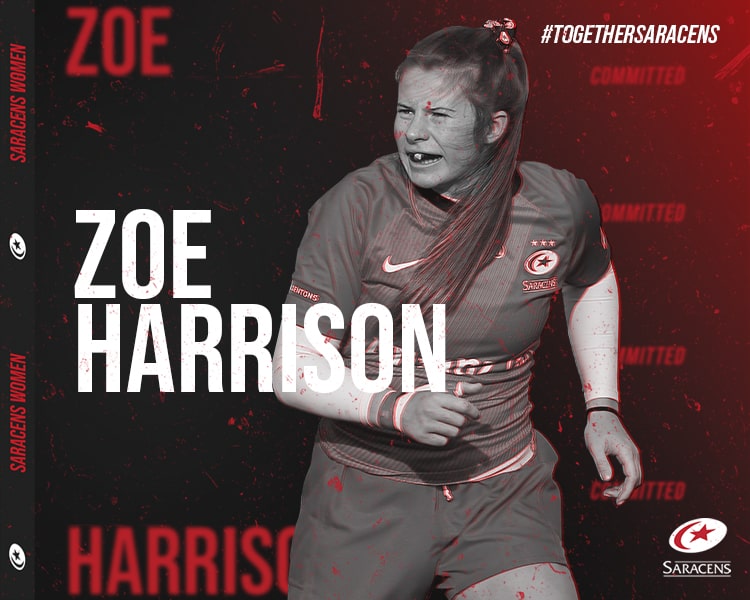 Saracens Women is delighted to announce England international Zoe Harrison has committed herself to the club.

Harrison started playing rugby aged five at Tring and moved to Welwyn to play Under-15s and Under-18s. She was in the talent development group at the age of 14 and made the step up to senior rugby in the 2016/17 season with Saracens, where she was then named players’ player of the year.

“It’s a great opportunity for me to continue my journey at Saracens and keep building with the girls.”

Her England bow arrived in 2017 against Canada where she made three appearances as a replacement in the autumn internationals and kicked her first points from the tee.

The 22-year-old was awarded a full-time England contract in January 2019 and featured in all five games of the Women’ Six Nations that year, starting the final three games as the Red Roses won the Grand Slam. She featured in all of England’s Super Series matches as well as the autumn internationals and all 2020 Women’s Six Nations matches.

“I’m excited to carry on what we’ve been putting together over the last two seasons,” Harrison said.

“It’s a great opportunity for me to continue my journey at Saracens and keep building with the girls.”

Head coach Alex Austerberry said: “Another youngster from Herts who came to Saracens from Welwyn and made an instant impact since making her senior debut, Zoe has grown from strength to strength and continues to unleash more of her potential.

“Already an extremely talented player and established international, she is working hard at her game and the fruits of her labour continue to pay-off. A triple threat with the ability to manipulate space for others and herself, Zoe has an all-round game and great ability to make correct choices under pressure.

“Her ability to manage games and sense where momentum and pressure at in a game really help the side navigate through games. It is a very exciting time for the club and with someone as exciting as Zoe committing to the club, I could not be happier.”