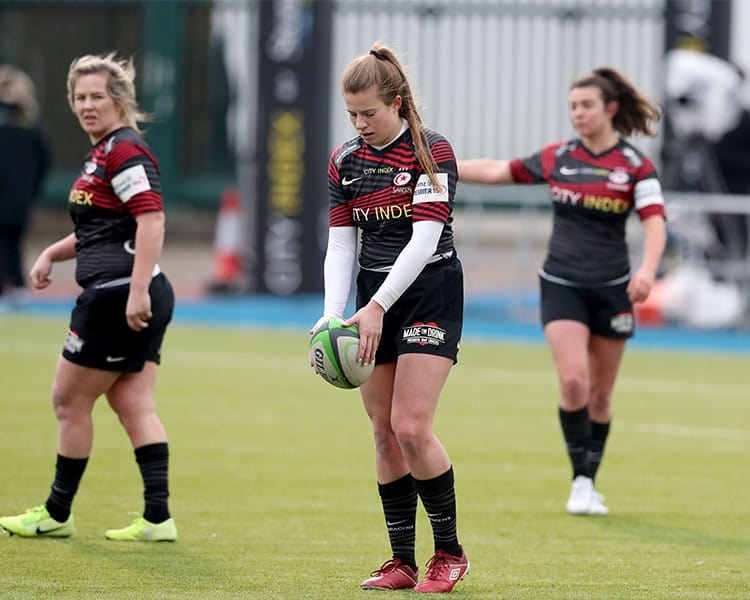 Harrison: We need to put together the perfect 70 minute performance

Zoe Harrison emphasised the need for Saracens Women to put together the perfect 70-minute performance after a resounding 47-18 win against Sale Sharks Women.

Poppy Cleall (3) and Tamara Taylor scored in a convincing first half display before Emma Uren, May Campbell and Mackenzie Carson crossed the whitewash in the second half.

A far more aggressive performance from Sale after the break was capped by a great Lauren Delaney try.

However, despite remaining in control for much of the game, Harrison stressed the need to improve in the later stages of matches.

“At the start of the season the issue was that we weren’t coming out firing and then we’d turn up after the break but now we’ve come out in the first half and lacked in the second half,” she said.

“So that’s where we need to improve, we need to make sure we put together the full 70 minute game.”

“We needed to come out the blocks firing this game so that it can lead into the next games, but it’s all about chasing that 70 minute performance.”

The England international was also full of praise for Poppy Cleall after her first half hat-trick, but was keen clarify that the backs have been a key part of the forwards’ try scoring prowess this season.

She added; “Poppy is great to play with, all the forwards are, they give us so much momentum and it’s really helpful for us backs as they give us a great platform to play off.

“At the same time it does come from what our backs are doing as well, someone’s got to kick that ball into the 22 so they can thank us for that!”