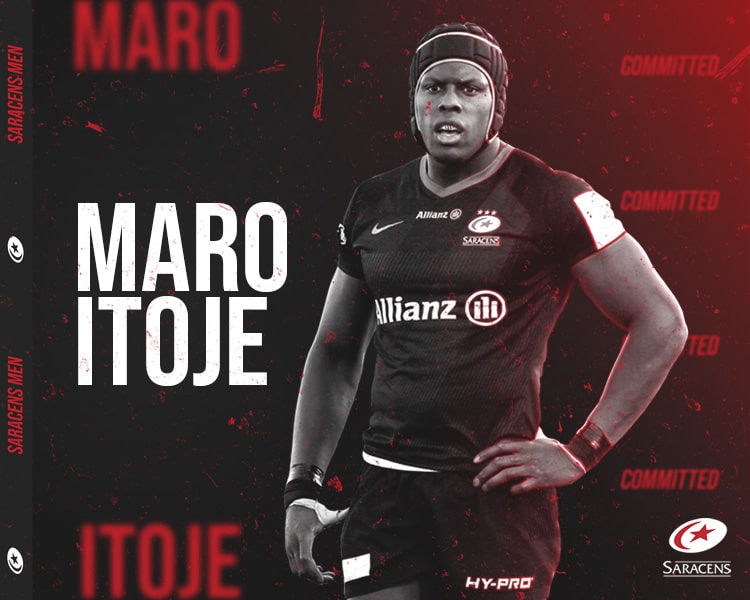 Itoje latest to commit himself to Saracens

Saracens is delighted to announce Maro Itoje has committed his long-term future to the club.

The 25-year-old is the latest England international to confirm he is staying in north London, following in the footsteps of fellow Rugby World Cup final starters Owen Farrell, Jamie George, Elliot Daly and Mako and Billy Vunipola.

Itoje has achieved a lot in his career in a short space of time since debuting for the Men in Black against Cardiff Blues in 2014.

His rise from the Saracens Academy to the international stage has seen him captain his country to a Junior World Championship title, skipper his club to LV= Cup success as well as being named the 2016 European Player of the Year.

“The culture at Saracens is second to none and I think that’s evident for everyone to see.”

The British & Irish Lion has made 119 club appearances to date and is excited by the challenges ahead.

“I’m massively excited to be a part of this club,” Itoje said. “I’ve been part of Saracens since I was 14-years-old, and we’ve had some great memories.

“The culture at Saracens is second to none and I think that’s evident for everyone to see.

“I’m really looking forward to the future; the future is going to be brighter than our past. The future is in our hands and we have the power to shape our own destiny.”

Director of Rugby Mark McCall said: “From his early days in our Academy, to being part of the club’s biggest moments, Maro has been a vital member of the Saracens project and we are thrilled he is committing to Saracens.

“On and off the field, Maro is a diligent, professional and thoughtful individual, who sets the example of what it means to use every opportunity you are given to improve. At 25, it is very exciting to think where he can take his game, this team and our club in the future.”