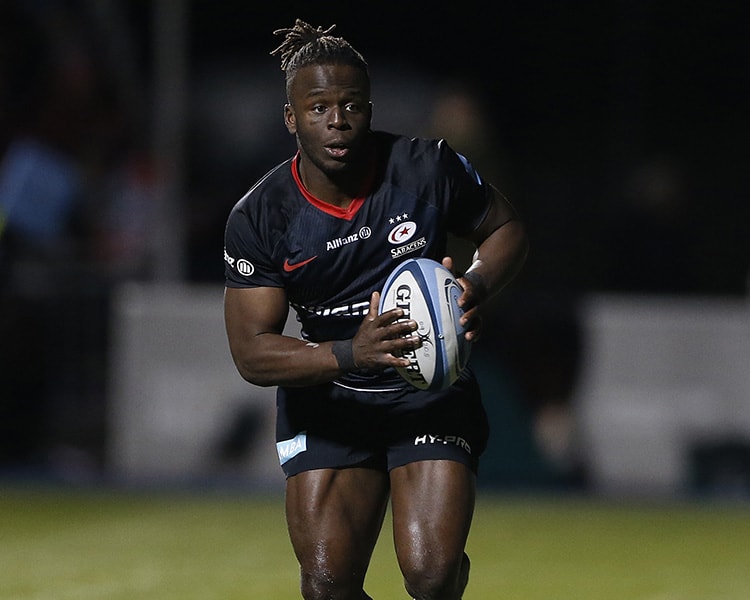 It’s almost two years to the day Rotimi Segun made his Gallagher Premiership debut for Saracens as a 67th-minute substitute against Leicester Tigers at Allianz Park.

Having already excelled in the Anglo-Welsh Cup for a couple of months and in the then A League competition, it was the wing’s first opportunity to showcase his talents at the top of the English pyramid.

To present day, Segun has 27 senior appearances under his belt in all competitions, the majority of which have come this term.

The 2019 Rugby World Cup, a tournament which saw 17 Saracens represent their countries, has allowed young, up and coming members in the Sarries group a chance to expose themselves at the highest level of the domestic game.

Segun has flourished in that environment. The 23-year-old warmed up for the 2019/20 Premiership campaign with four tries in the Premiership Rugby Cup and has continued his fine form into the New Year, crossing for a further four scores in all competitions including two on his home European debut against Ospreys.

“I feel like I’ve come on leaps and bounds from where I was back then,” the flyer said of his first outing in February 2018.

“Personally I feel like I’ve had a pretty good season. I’ve enjoyed a lot of game time, especially in pretty big games; I played at Racing away and at home, Munster away as well so it’s been a good year and good experience to play against some of the best players in the world.

“It’s quite funny because when you’re quite young you always think you’re raring to go and ‘get me on the field!’ but looking back on it then to the player I am now there’s definitely an improvement there.

“I just put it down to my mates on the field and obviously the coaches as well, making sure I’m engaged in what I do, enjoy what I do and that just makes everything easier to get better.”

You can read more from Segun inside Saturday’s match day programme where he discusses studying Chemistry, how the skills of the science are transferable to the pitch and learning off world class wingers.