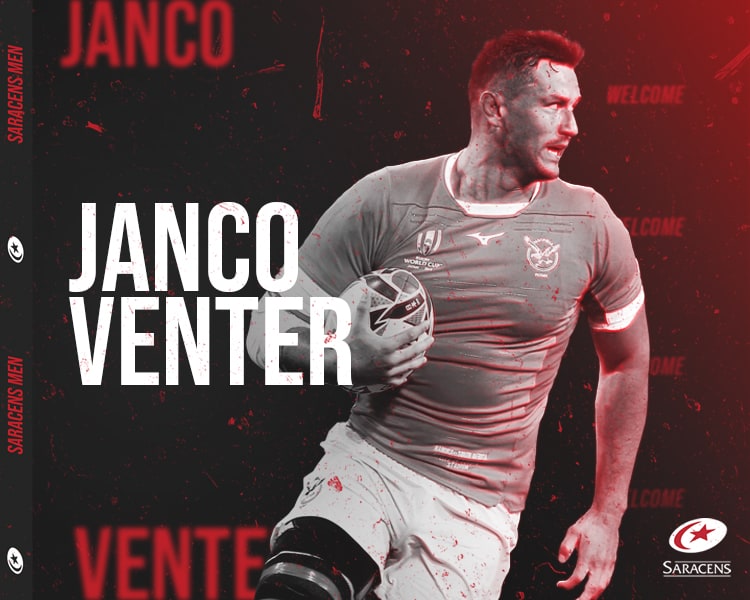 Saracens is delighted to announce the signing of back row Janco Venter from Jersey Reds.

The 25-year-old spent the last two seasons with the Championship side, just like new recruit Alec Clarey and was part of the club’s highest ever finish (fourth) in the 2018/19 season.

“I can’t explain to you how excited I am to have the opportunity to keep developing myself.”

Venter arrives with international pedigree having represented Namibia 28 times, including appearances at the last two Rugby World Cups in 2015 and 2019.

The former Stellenbosch University and Western Province forward can play anywhere across the back row and can’t wait for the next stage of his development as a Saracen.

“This is a little bit of a dream come true,” said Venter. “When I first came over to the U.K. a couple of years ago it was always with the dream and the ambition to play in a Premiership side and Saracens were at the top of the list.

“I can’t explain to you how excited I am to have the opportunity to keep developing myself. I think there’s no better place to be than Saracens to do that.

“The way everything is set up they want the player to be the best he can be and having played for Namibia, having had a taste for that higher level and being able to embrace your talents, I think I’m looking forward to that the most.”

Director of Rugby Mark McCall said: “We have been watching Janco’s progress over the last few seasons and are looking forward to welcoming him to the club.

“His potential is very exciting and we firmly believe his best days lie in the future. As a club we are extremely confident that we can help Janco take his game to new levels.”