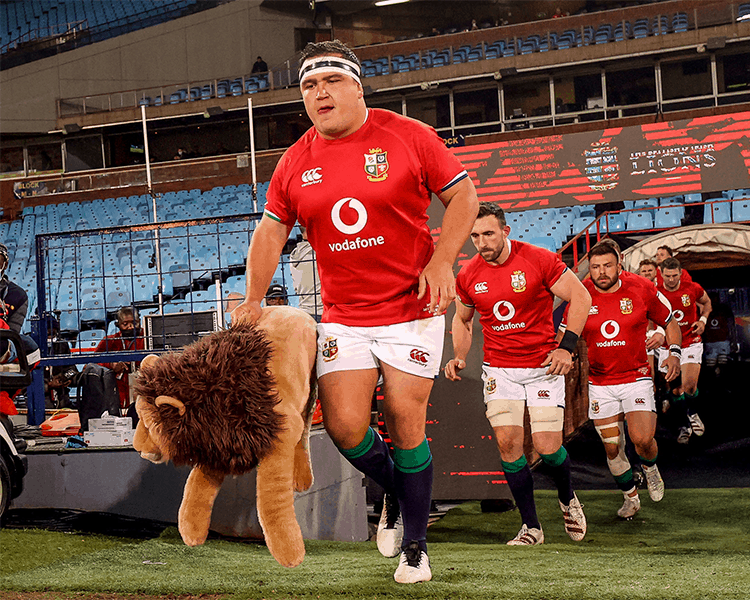 Saracens had six players thriving throughout the British and Irish Lions Tour of South Africa, with all of them making huge contributions during the biggest rugby event of the summer.

It was the Springboks that eventually came out victorious in a nail-biting third test in Cape Town to win the series 2-1, but over the course of the tour there were plenty of memorable moments for those who represent the Men in Black.

The tour started at BT Murrayfield on Saturday 26th June, just six days after Sarries had confirmed their place back in the Gallagher Premiership with their play-off victory. Jamie George and Owen Farrell were straight in to the squad after a training camp in Jersey, and came off the bench in the 28-10 victory over Japan.

The squad then departed for Johannesburg and their first match on South Africa soil saw them take on the Sigma Lions. All five of the Sarries starts featured, with Owen Farrell kicking eight conversions out of eight to guide the tourists to a 56-14 win.

The next match was against the Sharks, and in similar fashion a 54-7 win increased the confidence amongst the squad. Farrell kicked three conversions, whilst Mako Vunipola and Elliot Daly also started.

The next game will be remembered fondly by Jamie George, who captained the Lions for the first time in a huge honour for the hooker. Elliot Daly was on the scoresheet as George led his side to a 71-31 win in Pretoria.

South Africa ‘A’ were next on the fixture list, and a side packed full of World Cup winners was waiting for the Lions in Cape Town. Vincent Koch was taking on some familiar faces with four Saracens in the squad, and despite eight points from Farrell’s boot it was the hosts who won 17-13.

Daly was again in the match day squad for the next tour match, the centre was involved in every 23 on the tour as the Lions beat the Stormers 49-3 comprehensively at the Cape Town Stadium.

The highly anticipated first test was next on the agenda, and Itoje, Daly, Vunipola and Farrell were all involved in a memorable victory. Trailing at half time, the Lions turned it around and a 78th minute penalty from the Sarries skipper got the tourists a dramatic 22-17 win, with Itoje Man of the Match after an incredible defensive display.

The Boks responded in the second test with Vincent Koch playing a huge part off the bench as part of their famed ‘Bomb Squad’, and despite four Sarries putting on the red jersey it was the hosts who got a 27-9 win.

That meant that it all came down to the third and final test last weekend. Itoje, who played every minute of the test matches once again started with Vunipola and Daly on the bench. The Lions started well and had a 10-6 lead at the break, but the Boks would prove to be too strong in the second half and wrestled their way to a 19-16 victory to seal the series.

Although a heartbreaking defeat for Warren Gatland’s side, the Saracens contingent more than played their part in the series, with Maro Itoje since being named Player of the Series for his outstanding performances.

The players will now take some rest before returning to Sarries as the club prepare for their return to the Gallagher Premiership.

WATCH OUR LIONS IN ACTION WITH A 21/22 SEASONAL MEMBERSHIP