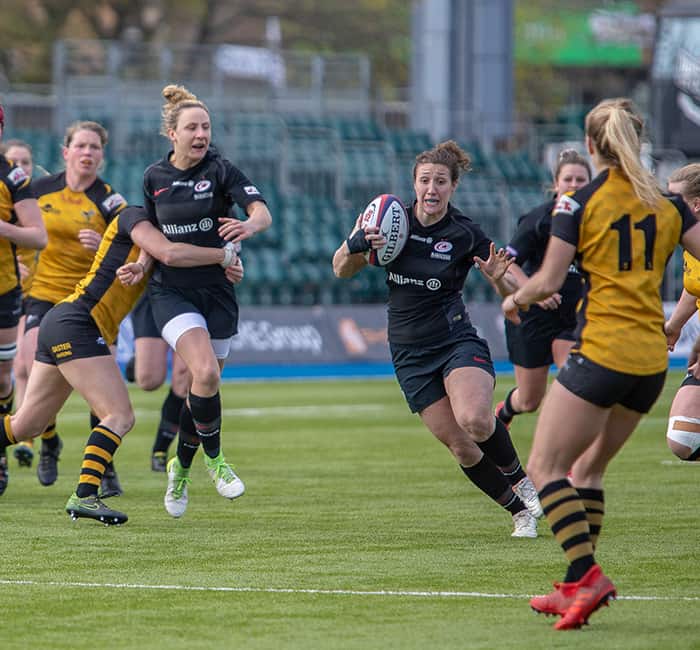 SARACENS WOMEN SECURED THEIR PLACE IN THE 2018/19 TYRRELLS PREMIER 15S FINAL WITH A HARD FOUGHT 31 – 13 WIN OVER WASPS FC LADIES AT ALLIANZ PARK, ON SATURDAY 13 APRIL.

Despite missing a number of players due to injury, the home team could still call on a side with a lot of international experience.

It was a nervy start for both teams as they took time to get into the game with a number of errors resulting in a stop start affair.

Wasps FC Ladies scrum half Claudia MacDonald picked up an early yellow card for foul play at the breakdown, but Saracens Women couldn’t quite take advantage.

Once the home team finally managed to string some phases together, they looked dangerous and Zoe Harrison did well to spot a half gap and offload to Jodie Rettie, who raced in under the posts.

A successful conversion from the fly-half meant it was 7 – 0 to Saracens Women after 15 minutes.

A second try followed just five minutes later and it was straight off the training paddock.

Sarah McKenna broke down the left off a scrum set play and held the defence to put captain Lotte Clapp in at the corner. Harrison’s conversion from wide on the left came off the post, making it 12 – 0 to Saracens Women.

The away team had the better of the rest of the half though as they brought their power players into the game.

Repeated infringements gave Wasps FC Ladies the chance to get themselves on the board and two penalties by Lizzie Goulden meant the score was 12 – 6 at half-time.

It was the home team though who came out firing and a powerful break by Hannah Casey led to penalty which was kicked into touch in the opposition 22.

From there it was all about the forwards with Poppy Cleall crashing over after a series of pick and goes. A second conversion by Harrison took the score to 19 – 6.

Saracens Women continued to dominate proceedings and they once again forced the away team to infringe in their 22 repeatedly. This time it was prop Hannah Botterman that went over as she showed her power close to the line.

Try number five followed just a few minutes later and it was the pick of the bunch. A powerful maul on the left from the pack had Wasps FC Ladies on the back foot and fullback Sarah McKenna took advantage as she stepped and weaved her away through the opposition defence.

She offloaded to Chrissy Siczowa as she carried into the 22. The ball was shifted left and after some nice offloading and carrying from the pack, it was Rosie Galligan who crashed over.

Harrison nailed her conversion and score was now 31 – 6 with 18 minutes to go.

To their credit, Wasps FC Ladies kept pushing and they got reward for their effort as Dodd powered over in the 78th minutes. Goulden’s third successful kick of the day meant the final score was 31 – 13.