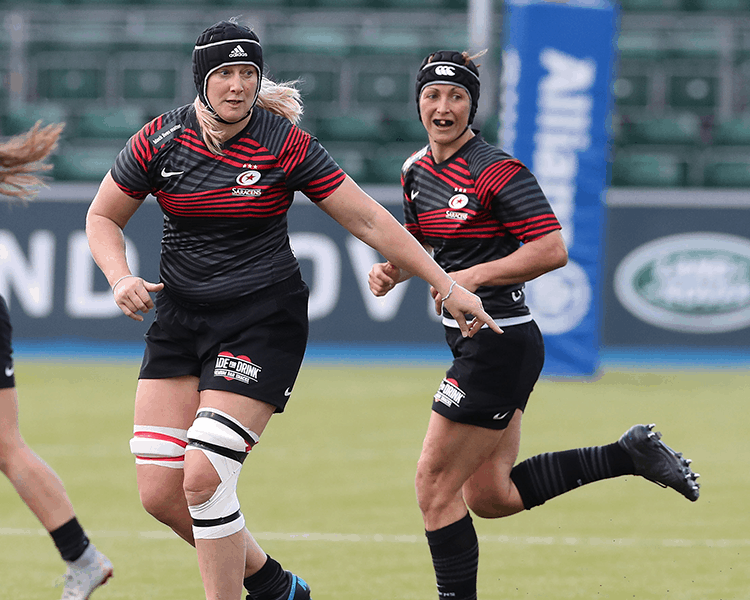 Holly Aitchison’s passing masterclass ensured Saracens Women had just too much for Wasps Ladies, who produced an incredible second-half fightback in a 33-27 thriller.

Stepping in at fly-half, Aitchison provided killer passes for Georgia Evans, Deborah Fleming and Chantelle Miell to all score as Sarries ran in five first-half tries to lead 33-3 at the break.

But it was a different story in a disappointing second-half for Alex Austerberry’s side as the visitors ran in four scores to set up a nervy finish in which Sarries just held on.

The Women in Black started superbly, muscling inside Wasps’ 22 before Kat Evans spotted a gap around the breakdown and dotted down under the posts on three minutes.

Aitchison, who had converted Evans’ try, then produced a sensational pass to put blindside flanker Evans through a gap to secure a second converted try inside ten minutes.

Wasps kicked a penalty through Flo Williams for their first points but Sarries soon had their third score as a looping pass from Aitchison found Fleming out wide.

The hosts were first to every loose ball and after Wasps couldn’t gather their own line-out in their own 22 it was Sarries who pounced as Rocky Clark drove over to secure the bonus-point inside 25 minutes.

Miell’s converted try ended a magnificent half after Aitchison picked the ball up off her boot laces and in one motion whipped it out wide for the centre to score.

Wasps looked a different side at the start of the second-half as Claire Malloy went over from close range after several strong carries round the corner.

The visitors were rewarded for their urgency as Rowena Burnfield successfully charged down a clearance kick and was then quickest to the ball to score.

And then Burnfield quickly scored a second with a strong carry from five metres as Wasps got to within 13 points with ten minutes left.

Sammy Graham’s show and go from the base of the ruck caught Sarries out as she scored with a minute remaining and gave Wasps hope of a sensational comeback.

But Saracens put in a strong defensive set with the clock in the red to force a knock-on and clear to seal a fifth consecutive Premier 15s victory.