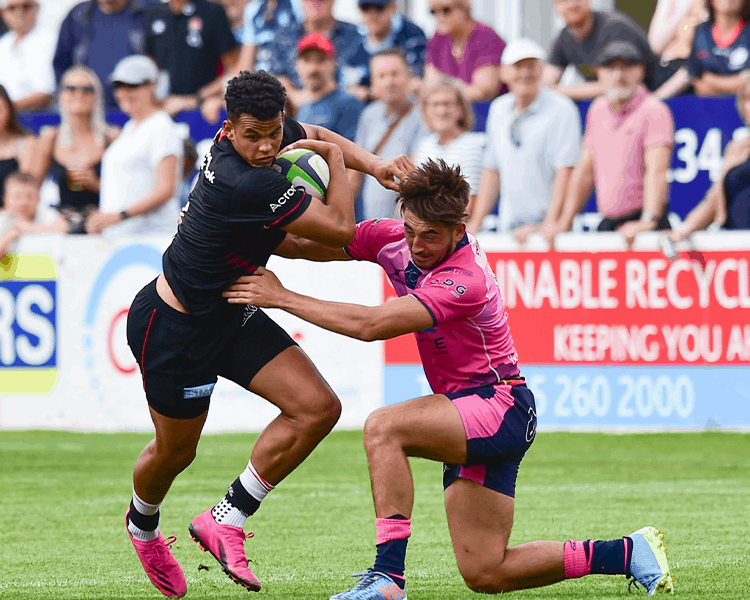 Saracens Storm suffered defeat on their return to action as they met a rampant Bedford Blues side who won 47-33 at Goldington Road.

A lively 80 minutes which saw 12 tries scored with plenty of attacking rugby, it was the Blues who ended up victorious during a very useful 80 minutes for the young Storm outfit.

In an uneventful opening the Blues enjoyed the majority of the possession, and they got their reward with 15 minutes gone as they took the lead. A penalty was kicked to within just five metres of the line, and from the resulting maul Luke Frost was there to cross from close range. Will Maisey’s conversion put the hosts 7-0 ahead.

That lead was doubled just one minute later as the Blues struck twice in quick succession. An overthrown lineout gave them turnover ball, allowing Rich Lane to draw in the final defender and release Matt Worley who had a clear run under the posts.

Their third try followed as the match entered the second quarter and Mike Rayer’s side continued to dominate. Sarries were on the attack but a wide pass was intercepted by Worley who had the pace to race away for his second of the match. A third conversion from Maisey meant that the Men in Black trailed 21-0.

It got better for the hosts for the remainder of the first half, as Frost went over for their fourth just before the half hour. More infringements meant that Cameron Boon was sent to the sin-bin, and then from the maul Frost was again able to dot down.

Sarries responded and scored their first of the afternoon with five minutes remaining until the break. They got some much needed possession which saw Tom Mills break through the line of defence, he was hauled down just short but it was recycled straight to Andy Christie who powered over from close range. Manu Vunipola’s conversion cut the deficit to 21 points, which is how it stayed as the teams went down the tunnel.

The hosts started the second half in fine fashion and scored their fifth try just five minutes after the restart. A smart grubber in behind found Pat Tapley in acres of space, allowing him to dot down unattended to take them over the 30 point mark.

Sarries then scored a brilliant team try just before the hour as they looked to mount a dramatic comeback. Tom Mills got the ball inside his own 22 but claimed his own kick ahead and then juggled it as he went within five metres of the line, but then from the next phase the ball was spun wide to Ben Harris who could dive over. Vunipola aded the extras from the conversion, meaning his team now trailed 35-14.

Any hopes of a comeback were ended when Bedford crossed with 15 minutes left to take them up to 40 points. In familiar fashion a penalty was kicked to the corner, and this time it was Jack Hughes who was the beneficiary to score at the base of the maul.

With the whole bench emptied for Sarries they looked to end strongly and Samson Adejimi nearly scored in the corner after a neat lineout move, but he was denied after a strong last ditch tackle.

Ben Harris then got his second of the day as his supporting run next to Llew Smith who sniped up towards the line allowed the Olympics star to dot down again, as a lively second half started to draw to a close.

The visitors continued to rally and went over for their fourth as Toby Knight crept to the line after some nice hands in the midfield, but Bedford responded straight away as Louis Grimoldby gathered an offload and ran clear from just inside the 22 for another five pointer.

Eroni Mawi rounded off the scoring as his impressive pick up from his feet got him over the line, and that proved to be the last notable action as the match ended with Bedford 47-33 victors.

The Storm will now prepare for another match on Friday evening when they welcome Ealing Trailfinders to StoneX Stadium.