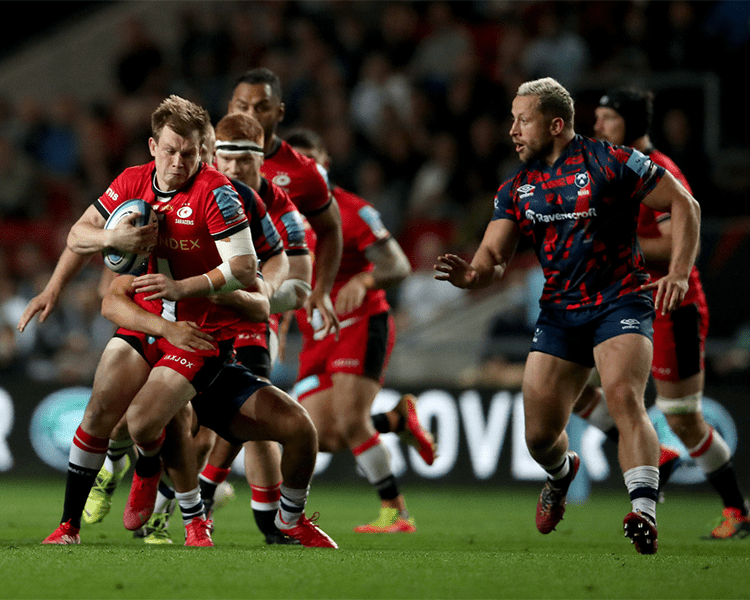 Saracens Men marked their return to the Gallagher Premiership with a fantastic 26-9 victory over Bristol Bears at Ashton Gate.

The victory, which was built on a relentless defence gave Mark McCall’s side the ideal start to the season with a memorable win.

Seven penalties from Man of the Match Alex Lozowski put the Men in Black en route to the win, and it was sealed late on as Alex Lewington scored the only try of the match.

In a tight opening half with nothing between the sides it was Bristol who took an early lead thanks to Callum Sheedy’s penalty with just five minutes on the clock after a spell of kicking from both sides ended in Sarries holding on to the ball.

Alex Lozowski responded straight away with a long-range penalty to open his account for the season as the visitors looked to build in to the match.

Bristol then enjoyed a spell of dominance and two penalties from the half way line in quick succession gave them a 9-3 advantage with 20 minutes played.

Elliott Obayotinbo and Billy Vunipola the combined to stop a certain try in defence, which proved to be crucial as half time approached. Charlies Piutau stepped past a number of defenders before releasing Ioan Lloyd on the wing, however a last ditch tackle pulled him in to touch.

Sarries then stepped it up before the break, and two huge scrums won resulted in two more penalties for Lozowski to bring his side level and send the teams down the tunnel locked at 9-9.

McCall’s men started the second half brilliantly and forced the Bears in to two errors which gave the visitors the perfect start.

A massive scrum gave Lozowski another long-range attempt which he was successful with to put his side in the lea for the first time in the match just five minutes after the restart.

Straight from kick off another penalty followed after Aled Davies’ inch-perfect box kick, and this time from even further out Lozowski was on the money as the lead grew to 15-9 almost immediately.

The Bears then looked for a way back in to the lead as Harry Thacker flew through the middle of the defence and then a sustained period of pressure followed, but the well drilled Sarries defence proved too strong and they soaked every phase up before winning a much-needed penalty.

On the hour mark another penalty came the way of the Men in Black after a half break from Alex Lewington had the home defence on the back foot, and just as he had done all night Lozowski again ensured that the fourth officials raised their flags to push the lead out to more than a converted try.

More defensive sets followed, and in the same pattern that had followed in the second half after the Bristol attack was stopped Sarries earned a penalty. Lozowski’s seventh of the evening meant the North Londoners were now 21-9 ahead.

The result was then put to bed with 10 minutes remaining as Lewington dived over for the first try of the match to the delight of the travelling supporters. A scrum deep in the Bristol 22 saw the ball spun to Lozowski who grubbered across to the winger who was in acres of space and acrobatically dotted down, extending the lead to 17 points.

Bristol had one more attack and came within inches of crossing the line, but on a night that belonged to the Saracens defence they wouldn’t be defeated and confirmed an impressive victory.