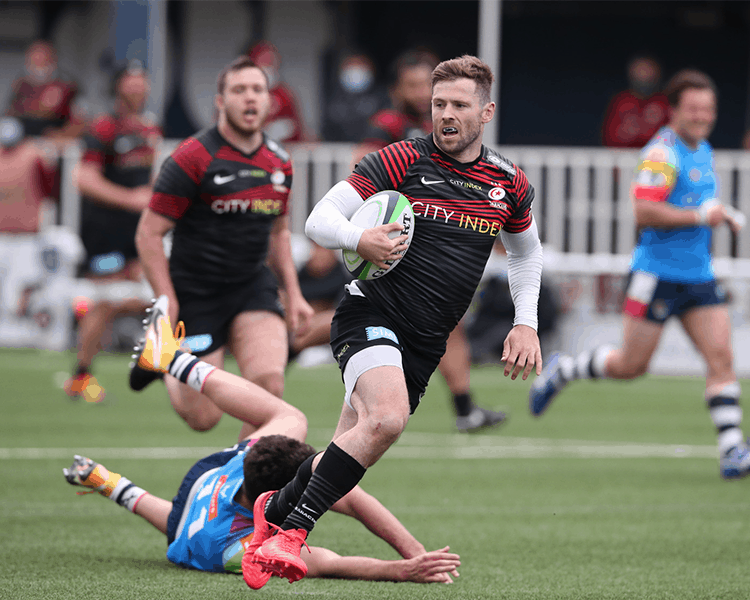 Saracens Men confirmed their place in the end-of-season play-offs after a mightily impressive 73-0 victory over Coventry at Butt’s Park Arena.

The win, which was their eighth in a row means that they are assured of a place in the top two, and they will finish top if they beat Hartpury by two points next Saturday at StoneX Stadium.

Mark McCall’s men scored 11 tries in total in arguably their finest performance of the season to date, as the attack clicked in to gear in emphatic fashion.

Sarries got off to the perfect start, and opened the scoring within the first minute. A long box-kick from Coventry found Billy Vunipola who released Alex Lewington straight through the middle. The winger had Nick Tompkins with him, and he unselfishly popped it up to Elliot Daly who dotted down in the corner. The conversion went wide, but the visitors had a 5-0 lead with just one minute played.

It took just five minutes for the next try to arrive, and it was Jamie George who bundled over for the second. Alex Goode was held up over the line, but play came back for a penalty which was kicked to the corner. The maul then powered towards the line from just five metres, and the England hooker was there to dot down.

The visitors were then camped in the Coventry 22 for large periods, which ended in Toby Trinder being sent to the sin bin as they looked to stop the pressure.

That pressure told on the 20 minute mark, as Sean Reffell powered over from close range. A five metre scrum saw a huge carry from Vunipola at the base, and from the following phase the young back-rower was never going to be stopped from just a metre out. Farrell’s conversion took the lead up to 19 points.

The bonus point arrived shortly after, with a brilliant individual score from Daly. Aled Davies’ disguised pass gave him some space, and he juggled acrobatically before using his footwork to dance under the posts from 25 metres out.

Sarries were in the mood and continued to rampage their way to victory with another try before half time.

Farrell’s kick to the corner gave them the territory, and then after a number of phases the ball was spun to Tompkins who stepped past the final defender to score. The conversion gave the Men in Black a 33-0 lead at the break.

The second half started in frantic fashion with the ball in play for extended periods and both sides landing some huge tackles.

The visiting supporters had to wait for 10 minutes for the next score, and it was Reffell who crossed for his second of the afternoon. A stolen lineout deep in the 22 gave Sarries turnover ball, and it went through the forwards before finding Reffell who scored in the corner.

Daly then nearly completed his hat-trick as a Coventry pass went to ground and he pounced on it, but his kick ahead bounced away from him and allowed the hosts to escape.

The try of the match then saw Daly get his third in stunning fashion as the lead kept growing. Tom Whiteley’s break took play up to half way, and then a neat one-two between Daly and Farrell provided all the space in the world for the two-time Lion who sprinted over from outside the 22. The extras from in front of the posts meant the lead was now 45-0.

The bench was then emptied as some extra North London firepower entered the pitch, and it had the desired effect as the half century was brought up in style.

A maul powered towards the whitewash, and then it was shifted to Farrell who grubbered to Maitland who gratefully received it in the corner to dot down.

The attack continued to flourish, and Whiteley then scored from another long-range counter as the try of the season contenders continued. Goode danced in to their half and he had options either side of the last defender, choosing to release the scrum-half who had the pace to score.

Maitland got his second as play entered the last 10 minutes, which also was the 10th try of the match. More nice passing out wide gave Goode space in the channel, and he offloaded to the Scotland winger who had clear space in front of him to march over.

Dom Morris then rounded off the win with a try in the last minute, as he once again took advantage of a loose ball and was able to race away to end the game in style. Farrell’s ninth conversion ensured it ended 73-0 after a relentless performance from his side.

Sarries round off the regular season against Hartpury next Saturday at StoneX Stadium, safe in the knowledge that they have two huge play-off matches to look forward to in mid June.