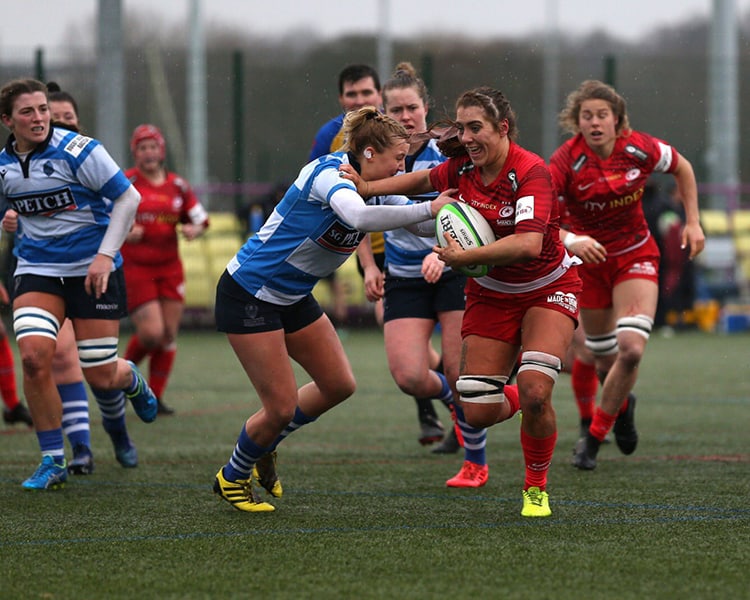 Saracens Women bounced back from their first loss in over 30 matches with a commanding 73-3 victory against DMP Durham Sharks.

Vicky Fleetwood, Poppy Cleall (2) and May Campbell secured a try bonus-point in a dominant first half before Number 8 Cleall completed her hat-trick.

The opening five minutes proved even but thereafter it was all the visitors. Fleetwood collected Holly Aitchison’s pop to crash over following patient build-up with the fly-half adding the extras.

DMP replied via a Beth Blacklock penalty, though it was the points they enjoyed in the 70 minutes.

England international Cleall then cleaned up the scraps from a collapsed driving maul and barreled over two players and she grabbed her second from a barnstorming carry.

More lethal attacking play from inside five metres saw Sarries score again through hooker Campbell, ahead of Cleall starting the second half in similar fashion to her first-half exploits.

The 28-year-old hit an excellent line to speed under the sticks for her third score of the contest.

Miell then touched down after Saracens created an overlap, leaving her to score a converted try and Wales lock Evans continued the away side’s fine performance with a dot down.

Mesmerising footwork from Aitchison down the left flank then created space for a pass to Clapp, who scored despite finding herself in a tight scenario by the left corner flag and prop Clifford notched her first senior try from the back of a maul after more close quarters attacking play.