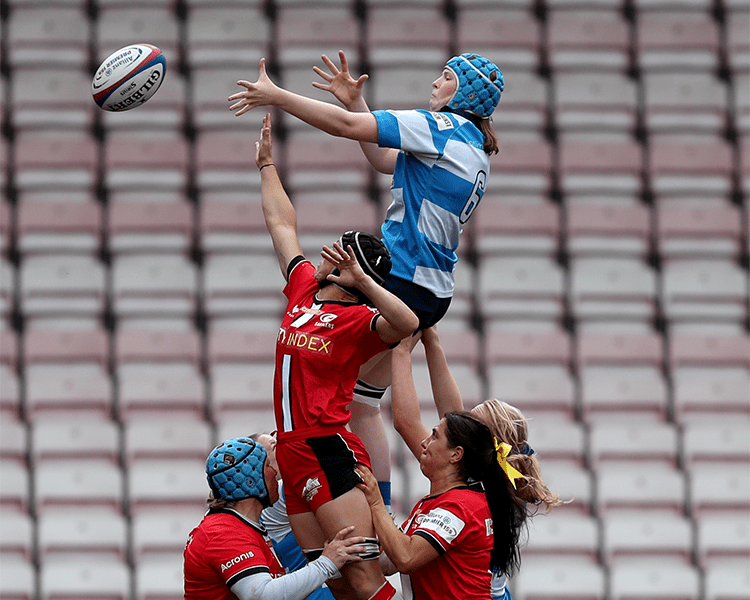 Saracens Women continued their winning start to the season with a convincing 77-5 victory over DMP Durham Sharks.

The visitors dominated throughout, scoring 13 tries to deflate their hosts and get their second bonus point victory of the campaign.

The intensity from Sarries was noticeable from the kick-off as an early turnover allowed Lotte Clapp to cap off some good play from the backs with a try in the corner, and she had a second before the clock was past 10 minutes. Another turnover was followed by a clever switch of play down the Sharks blindside with the skipper again on the end of the move. Zoe Harrison added the extras and the scoreboard made pretty reading at 12-0 early on.

The left wing was proving particularly fruitful for Sarries as Holly Aitchison scored the third in the same corner after another pleasing passage of play from the back line.

The Sharks did threaten to pull one back and came inches away from a route back into the game before Sarries scrambled the ball clear thanks to a turnover on their own try line. The hosts were made to pay shortly afterwards when Marlie Packer scored her second of the season from close range.

The highlight of the first half came when Vicky Fleetwood, on her 50th cap for the club, slalomed through the Sharks defensive line and charged towards the try line. When caught by the Sharks defence she cleverly offloaded in the tackle before the ball found Harrison, who had the simplest of finishes from close range. The fly-half then converted her own try to make it 29-0.

The forwards took charge for the final 10 minutes of the first half as Kat Evans notched two tries on her first start of the season. Harrison had the final kick of the opening 40 minutes and stretched the score to 41-0 at the break.

The second half began with Saracens looking just as threatening as they had in the opening 40. Ella Wyrwas scored her first try since returning to the club from close range as the second half point scoring began.

Coach Alex Austerberry took advantage of the big lead lead and gave a number of substitutes an opportunity to impress from early in the second half. Winger Rachel Laqeretabua made an immediate impact with one of her first touches of the ball. Picking up a loose clearance kick she darted through the Sharks defence to bring up the half century of points. With Harrison withdrawn at half-time, Aitchison assumed kicking duties and added to her earlier try with a conversion.

Two more tries followed in quick succession, as Poppy Cleall capitalised on a mistake in the Sharks defence to break through and then substitute Jodie Rettie was on hand to score after a well-executed rolling maul.

The Sharks did pull one try back to give the home support something to cheer about, when Trudy Cowan pounced after a spell of Sharks possession, crushing any hopes of a clean sheet for the visitors.

The Sharks grew in confidence and with the home crowd behind them started to cause Sarries some problems in the closing stages, but with time running out the travelling Sarries fans got their wish as Fleetwood scored to ensure her personal milestone would be even more memorable. One final try followed from Sarah McKenna to make it 77-5 when play drew to a close.

The Women in Black will be looking to continue their 100% start when they play their first home game of the season against Loughborough next weekend.