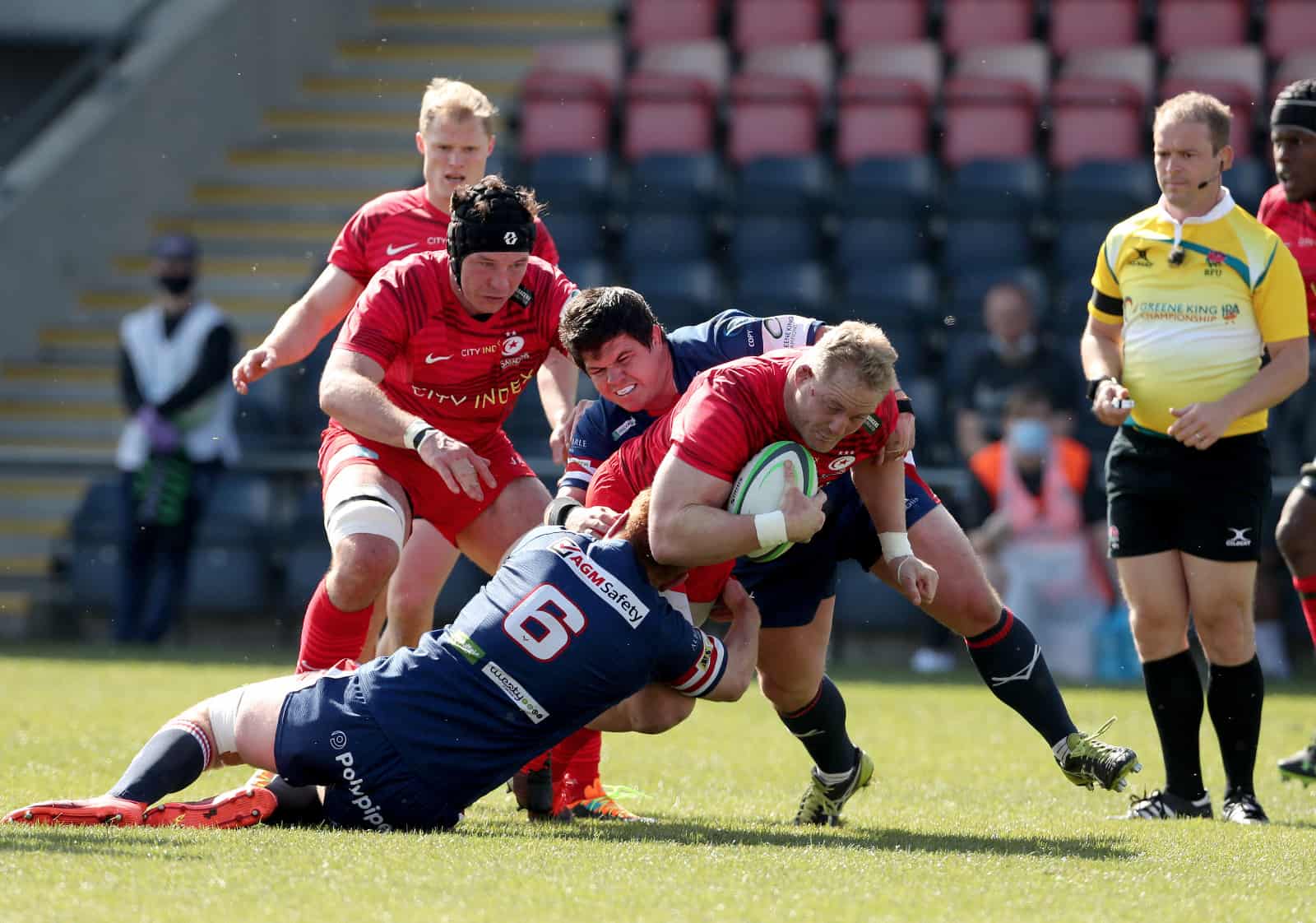 Saracens Men secured their fourth consecutive victory in the Greene King IPA Championship with a dominant 50-15 win over Doncaster Knights at Castle Park.

Mark McCall’s side scored eight tries in total and played some of their best rugby so far this season to end Doncaster’s unbeaten start to the campaign.

The opening exchanges were highly physical with both sides trading shots but to little avail, however Doncaster’s early endeavour was rewarded on the 10 minute mark as Sam Olver’s penalty from 35 metres out put the hosts 3-0 ahead.

That seemed to spark Saracens in to life, and virtually straight from the kick-off they responded with their opening try of the match.

Billy Vunipola quickly tapped a free-kick and drew in a number of defenders, before Owen Farrell’s flat pass to Elliott Obatoyinbo created an overlap on the right hand side which allowed Alex Lewington to dive over in the corner. The conversion went just wide, but McCall’s men now had a 5-3 advantage.

Some half chances followed as Nick Tompkins broke through down the touchline but had no-one in support on his return to the starting line-up, however the men in black wouldn’t have to wait long for another opportunity.

Sean Maitland then crossed for the second try to give his side some breathing space. Farrell, who found space put through an inch-perfect grubber kick which bounced up perfectly for the Scotland winger who made no mistake from just five metres out.

In a spell of real dominance Elliott Obatoyinbo went within inches of scoring, but was held up and a five-metre scrum followed. The patience was rewarded though, as Maro Itoje went over from the next phase to score for the second week in a row.

There was still time to secure the bonus point before the break, and it came courtesy of a brilliant try from Michael Rhodes. Tompkins made another storming run through the middle and was hauled down just short, but then the ball was spun straight to the flanker in the corner who could stroll over for try number four.

Farrell’s touchline conversion meant his side headed down the tunnel with a 22-3 lead at the break after a dominant opening 40 minutes at Castle Park.

The second half started in similar fashion with Sarries scoring their fifth try just seven minutes after the restart. Farrell released Tompkins who had a three on one as he entered the 22, and he passed inside to Aled Davies who had the pace to race through and dot down. The conversion stretched the lead up to 26 points.

Lightning struck twice as Davies was on hand for his second try less than five minutes later. A line out just outside the 22 saw the backs go through the hands with a brilliant set play, and Elliot Daly stormed towards the line before drawing in the final defender and allowing Davies to cross under the posts.

The game then lost some intensity as both sides made a whole host of substitutions in the Doncaster sunshine, but Saracens then continued to flex their muscles as the match entered the final quarter.

Tom Woolstencroft was next over the whitewash, this time from the base of a rolling maul which powered towards the line and gave the hooker the chance to dive over from close range. Manu Vunipola’s conversion then took the visitors over the 40 point mark.

The Knights then had a spell of possession after a sequence of penalties took them deep in to the 22, and their resilience was rewarded with Jack Davies driving over from just one metre out to score their first of the afternoon.

Jack Spittle cut the deficit further as he got on the end of an adventurous counter attack to score Doncaster’s second, but Tom Whiteley then rounded off the scoring with a brilliant individual try to bring up the half century for Sarries.

The scrum-half hacked the ball ahead and then showed excellent football skills to control it and score acrobatically to the delight of the bench who were suitably impressed with their extremely vocal support. Vunipola’s conversion was to be the last act of the match, and confirmed an impressive victory for McCall’s men.