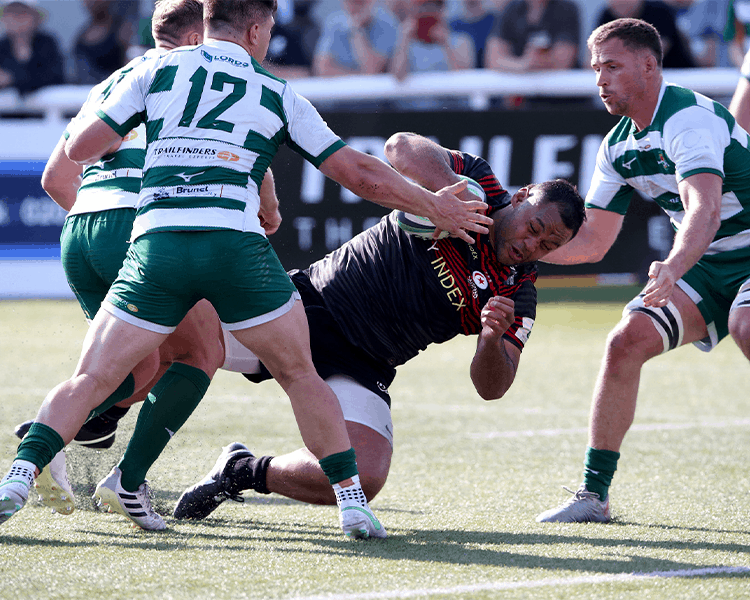 Saracens Men made the perfect start to the Greene King IPA Championship Play-Offs, as they stormed their way to a 60-0 victory over Ealing Trailfinders in the first leg.

At a sun-drenched Trailfinders Sports Club, Mark McCall’s men were in sensational form en route to an eight-try win which puts them firmly in the driving seat ahead of the second leg at StoneX Stadium next Sunday.

Sarries started strongly and took the lead with just four minutes on the clock courtesy of Owen Farrell’s boot. Some nice hands in the midfield saw Sean Maitland released down the wing and from the following phase a penalty was awarded, which the skipper kicked straight through the posts.

The Trailfinders looked to get straight back in the match with a sequence of penalties which took them up to the line, but they were met by a brick wall in defence and eventually the Men in Black turned the ball over.

In typical Sarries style, they then punished their opponents for not taking their chance, and Maro Itoje then bundled over from close range to score the first try of the match.

Mako Vunipola and Vincent Koch were both pulled down just short, but then the second-rower spotted a gap from just a metre out and dotted down to extend the lead. Farrell’s conversion took the lead up to 10-0.

Max Bodilly then picked up a loose ball from another Saracens attack and stormed forward showing impressive pace for the hosts, but Elliot Daly scrambled back brilliantly to stop the attack.

Dean Hammond was then inches from scoring for the Trailfinders after a set move at the line out gave him a chance in the corner, but once again the defence held firm and he was dragged in to touch.

Aled Davies then scored a great team try under the sticks to give Saracens some considerable breathing space. From under his own posts Farrell broke and released Nick Tompkins who made great ground in the midfield. Some nice hands then allowed Jackson Wray to power in to the 22, and Farrell was on his shoulder to gather. The captain was tackled just short of the line, but he popped it up to the Welsh scrum-half who was able to dive over. The conversion meant the visitors were now 17-0 in front.

The pressure was beginning to ramp up from McCall’s men who kicked a penalty to the corner and despite the lineout being overthrown the ball was switched to the left wing to Maitland, but in the act of scoring the ball was fumbled and the Trailfinders got the put-in.

A penalty from a scrum right in front of the posts then allowed Farrell to kick another penalty, as the lead grew to 20 points with half an hour on the clock.

Jamie George then ended the first half in perfect fashion as he crossed to give his side a resounding lead at the break. A penalty was kicked deep in to the 22, and then a dominant rolling maul showed no signs of stopping before the England hooker was able to dot down at the base. Farrell added the extras with the last play of the half, as Sarries went down the tunnel with a 27-0 lead.

Saracens then made the ideal start to the second half as they continued to flex their muscles. Daly’s break looked to have cut the defence wide open but the pass went to ground, however from the resulting penalty the ball was kicked to the corner and the trusted rolling maul was once again too powerful to stop. Billy Vunipola arose from the pile of bodies having scored, and the lead was now over 30 points.

More pressure in the 22 then saw Tompkins within inches of try number five, but as he went down the shortside the ball was bounced out of his hands by a last ditch tackle.

They didn’t have to wait too much longer though, as from the scrum the ball was spat out against the head and bounced up for Billy Vunipola who was never going to be stopped from just five metres out. The conversion brought up the 40 point mark for McCall’s side.

It got even better for the Men in Black with 65 minutes gone, with referee Wayne Barnes awarding them a penalty try. Another rolling maul hammered towards the line from 20 metres out, and it was brought down illegally which saw Guy Thompson sent to the sin-bin and gave Barnes no option but to go under the posts.

The Trailfinders then looked to get on the board and broke away with a ball kicked deep in to Sarries territory, but Alex Goode and Duncan Taylor combined well to get back and from the next phase a counter attack ended in a brilliant try for Tompkins.

Some more brilliant hands in the midfield created a three-man overlap on halfway, and the centre was able to stroll in unattended to bring up the half century of points.

Maitland then rounded off the victory in stunning style as some basketball style hands in the middle from Duncan Taylor opened up the right wing for the winger who juggled it and then used his pace to race over the line.

That proved to be the last act of a memorable day in West London which has given Saracens a healthy lead going in to the second leg.

A 2021/22 SEASONAL MEMBERSHIP IS THE BEST WAY TO GET BEHIND YOUR SARACENS. GUARANTEE YOUR SEAT AT ALL THE BIG MATCHES AS WELL AS ENJOYING A WHOLE RANGE OF ADDITIONAL BENEFITS AS PART OF YOUR PACKAGE!

Complete the form below and a member of our team will be in touch to discuss your Seasonal Membership options.