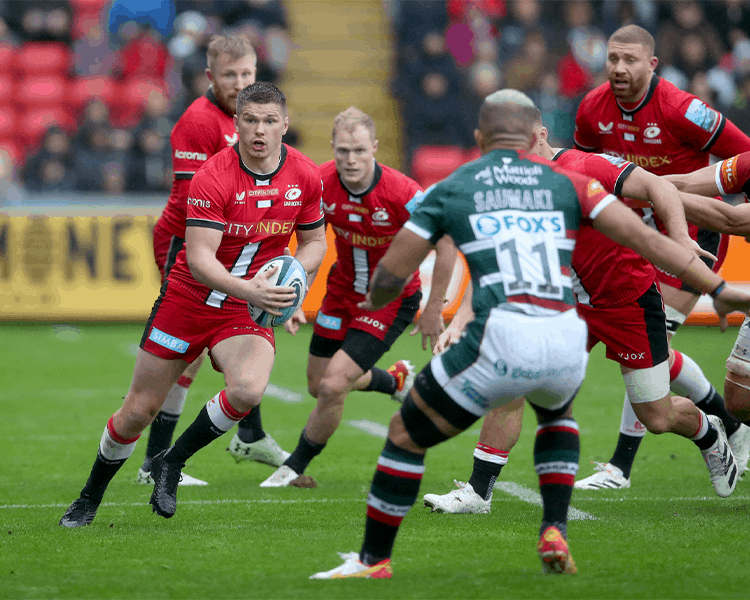 In dreadful conditions in the Midlands, Mark McCall’s side had a 12-6 lead right up until the death courtesy of four Owen Farrell penalties, but the penalty try meant the Tigers took the win.

Sarries enjoyed most of the possession in the early stages and looked the most likely to break the deadlock.

Owen Farrell’s break released Alex Lewington down the wing with just five minutes played, but his grubber just trickled in to touch with the defence scrambling back.

The physicality from the North Londoners was rewarded just three minutes later however, with Farrell kicking his first penalty of the match to put his side 3-0 in front.

That lead was doubled almost straight away as the Tigers kick off went dead and Sarries got a penalty from the scrum, which Farrell kicked from half way to make it 6-0 with 10 minutes gone.

Ralph Adams-Hale then charged down a George Ford clearance and it looked as if it could give the visitors a chance in the 22, but Freddie Burns was first to the ball and the home supporters could breathe a sign of relief.

Tigers then started to grow in to the game and entered the Sarries 22 for the first time with 26 minutes played, but despite their front foot ball a brilliant turnover from Billy Vunipola got his team out of jail.

As half time approached a huge hit from Alex Lozowski on Freddie Burns gave the visitors a scrum in a great position, and Farrell’s grubber was nearly gathered by Nick Tompkins but once again the Tigers scrambled back.

Rotimi Según then countered and found himself in space as he entered the 22 which resulted in a penalty and allowed Farrell to extend the lead to 9-0.

George Ford got the Tigers on the board with a plenty in the final play of the half, meaning Sarries went down the tunnel at the break with a six point advantage.

The start of the second half saw both sides using the boot as they looked for territory in the rain, but it was Sarries who struck first just before the 50 minute mark.

Two consecutive penalties took them in to the 22, and then Farrell pointed at the posts and kicked it straight through them, edging the lead out to 12-3.

Leicester looked for a way back in to the match and a string of penalties took them all the way up to the line, but just at the crucial moment Nick Isiekwe used all of his size to steal it in what was a crucial moment.

Just five minutes later they were again within five metres of the line, but this time it was Vunipola who hammered Jack van Poortvliet who was sniping around the whitewash and his tackle forced a knock on.

Leicester then thought they had finally got over the line, but the TMO denied them much to the disgust of those in the stands. A box kick bounced around in the wet and eventually van Poortvliet gathered it to dive under the posts, but after a check upstairs he was offside and Sarries got the penalty.

With just five minutes remaining Ford kicked a penalty from 40 metres to cut the lead to just six points, and then the hosts went on the charge as they looked to complete a late comeback.

They broke in to the Sarries half and had the momentum, and as they entered the 22 they were dragged in to touch however it was deemed illegal by the referee which gave the Tigers one last chance.

That chance came in the form of a five metre lineout, and the maul proved to be unstoppable which saw them awarded a penalty try to dramatically record a 13-12 win.

Sarries are at home next weekend for the first time this season against Newcastle Falcons, limited tickets are still available and can be purchased by clicking here.