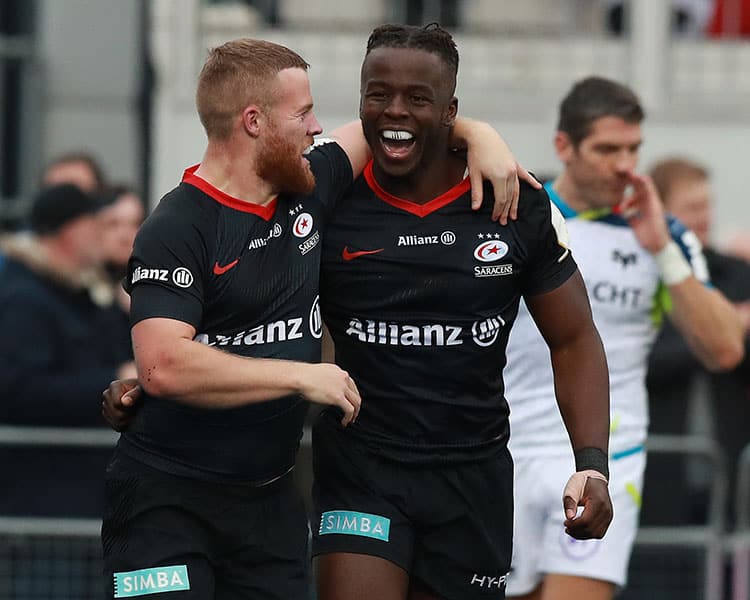 Saracens Storm backed up their opening day bonus-point victory with another against London Irish A in the Premiership Rugby Shield.

Tries from Tom Whiteley and Rotimi Segun sandwiched a Jonathan Kpoku to put Sarries in a commanding position at the break and Ollie Stonham sealed the contest towards the end.

Fly-half Manu Vunipola nailed four conversions, all from out wide.

On a calm night at Hazelwood Training Centre, both sides used box kicks in the early stages to test the back field with Storm dominating up front, especially at the set-piece.

Wales international Rhys Carre was enjoying a lot of joy at the scrum and after he and his fellow forwards won a penalty by running over their opposition eight, they were in action again at the line-out which led to the game’s first score.

Kapeli Pifeleti collected his throw at the back of a fast-moving maul, peeled off and bumped a couple of Irish players out the way before delicately offloading for a speeding Whitley to dive over the whitewash.

Irish responded immediately and pulled a try back through quick thinking. Rory Brand picked up a ball and chose to tap and go from a five-metre penalty and managed to sneak into the corner.

Two points ahead, Saracens extended their advantage moments later. The scrum provided the platform for young Josh Hallett to burst upfield from the centre and the visitors continued creep forward with Kpoku finishing off from close range.

Wil Partington hit a penalty to edge the home outfit closer once more but Sarries remained on top, only for several moments of isolation in the opposition 22 denying them an opportunity to add to their 14 points.

They did score a third five minutes before the break. Patience was key as the forwards trundled on close to the line and Kpoku was on hand to squeeze home for his second of the night.

The score of the game came prior to half-time. It was down to Storm’s line-speed which pushed Irish back 20 metres with a huge Vunipola tackle forcing a spill. Whiteley picked up the loose ball and fed Segun who danced in off the wing and beat two defenders to dot down.

London Irish began the second half on the front foot as they searched for a way back in the game and but for a superb aerial take by Elliott Obatoyinbo they would have crept over for a second try of their own.

It did occur eventually and deservedly so. The Irish pack rallied and built momentum inside the Storm and Chunya Munga capitalised around the fringes.

The try was to prove in vain as Storm wrapped things up with a fifth score. Whiteley’s cute chip over the top caused havoc in Exile ranks and Stonham kept his on the bobbling oval to score on his first Shield start.