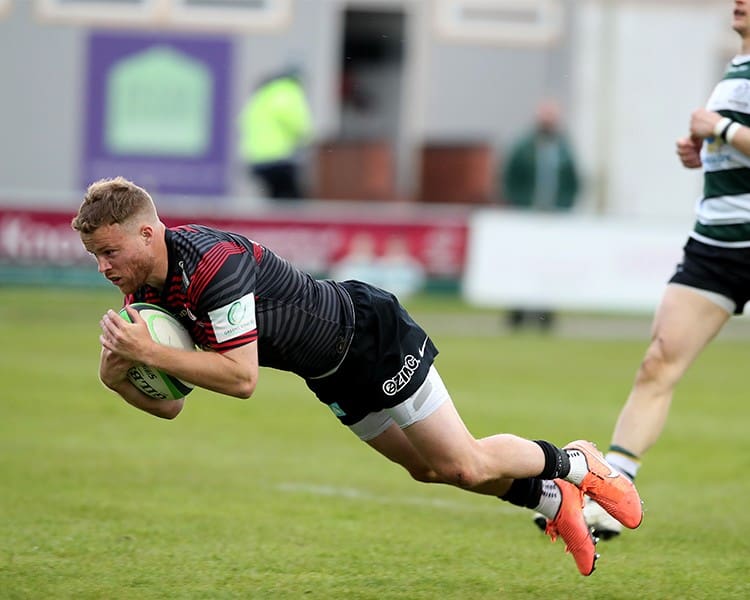 Saracens Men rampaged their way to a highly impressive 56-0 victory over Nottingham at Lady Bay.

Mark McCall’s side scored eight tries in total during a dominant display, as they made it six wins in a row with a professional performance.

Andy Christie, Dom Morris, Tom Whiteley, Eroni Mawi and Harry Sloan all scored, as well as a double for Alex Lewington, a penalty try and seven conversions from Owen Farrell.

Elliot Daly came within inches of opening the scoring with five minutes on the clock, but some last ditch defence kept it level. Whiteley sniped down the short side and had the England International alongside him who chipped ahead, but it bounced kindly for Nottingham who were able to clear.

It didn’t take much longer for the Men in Black to get their first try of the match, as Christie dotted down five minutes later. A penalty was kicked to the corner, and Janco Venter broke away from the maul but was dragged down just a metre short. From the following phase Christie was at the base, and was driven over under the sticks. Farrell’s conversion gave his side a 7-0 advantage.

Sarries continued to play from deep when given the opportunity in the opening exchanges, but the final pass wasn’t sticking as they failed to capitalise.

Morris’ powerful break saw him offload inside to Whiteley but it was fumbled, and then Nottingham went on the counter but Jack Stapley’s kick went straight out with a number of their backs chasing it down.

Lewington was next on the scoresheet as the lead started to grow at Lady Bay with a brilliant team try. Billy Vunipola’s fizzed pass to Venter set the back-rower free on the wing, and then it was recycled inside with Farrell and Duncan Taylor combining nicely to create space for Lewington who could stroll through from 15 metres out. Farrell was again successful from the tee to make it 14-0 with 15 minutes left of the first half.

The third try came courtesy of Morris just before the break. After a spell of sustained pressure on the line Nottingham had Ben Betts sent to the sin-bin, and then from the resulting scrum Billy Vunipola was stopped just short, before the ball was spun to the centre who stepped over the line from close range. Farrell’s third conversion ensured Sarries went down the tunnel with a 21-0 advantage.

McCall’s side started the second half with much more intensity and rhythym, and reaped the rewards just three minutes after the restart as they got their bonus point try. A penalty was kicked deep in to the 22, and then with the rolling maul powering over it was brought down, and gave referee Anthony Woodthorpe no option but to award a penalty try.

Lewington then got his second of the evening as the visitors continued to go through the gears. Daly gathered a high ball and then the backs charged towards the 22, before Lewington gathered and stepped his way past the final defender with a classy finish. Farrell dissected the uprights again as Sarries now had a 35-0 lead.

Whiteley then scored the try of the match with 54 minutes gone with a sensational first phase score. From the base of the scrum the backs moved it to Daly who showed searing pace to charge in to the 22, and then he played it inside to the scrum-half who dived under the sticks and brought up 40 points for the visitors.

Nottingham then looked to get themselves on the scoresheet as they went through the phases within touching distance of the line, but they were met by a ferocious defence and as the ball spat out of the breakdown Lewington hammered it away with a long range kick to clear the danger.

Mawi got in on the act with 15 minutes left as he crossed from close range for try number seven. A penalty was taken quickly right on the line, and the prop was never going to be stopped as he hammered his way over. Farrell continued his 100% record from the tee, and took the lead to 49-0.

Sarries were really expressing themselves in the closing stages as the game began to open up, and some outstanding handling allowed Jamie George and Jackson Wray to bring play right up to the line, but just as it was about to be spun wide with an overlap a fumble ended the opportunity.

Sloan brought up the half century with the final score of the match to end the game in style. The centre picked a great line off the back of a line out, and he smashed over the gainline to stretch his way over. The conversion was to be the last significant action, confirming a resounding 56-0 victory for Saracens.