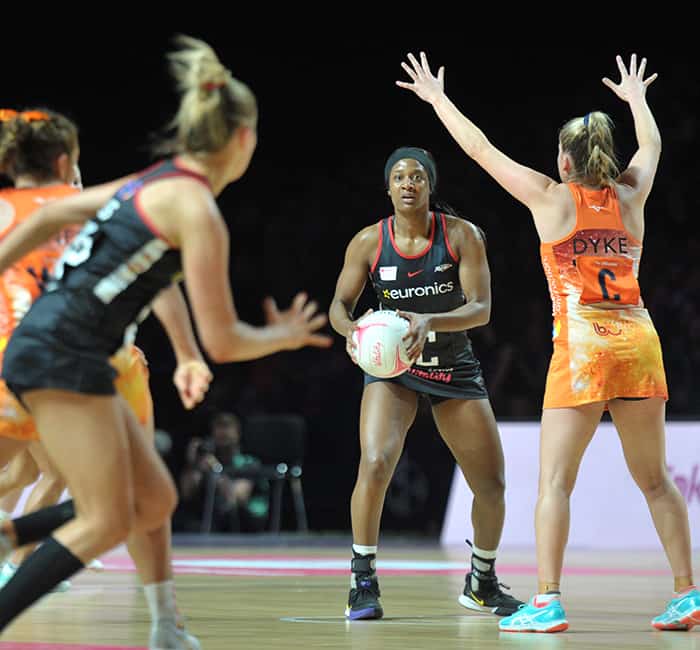 Saracens Mavericks got their Vitality Netball Superleague 2020 season off to a strong start with a resounding 70-49 win over Severn Stars on Saturday 22nd February at Arena Birmingham.

While Mavericks ran out comfortable winners in the end, there was a decidedly nervy start to their opening game of the season.

After some strong words from Kat Ratnapala, Mavericks came out firing and dominated proceedings with their defensive pressure telling as they forced Stars to turnover possession on multiple occasions.

A 23-8 second quarter gave the women in black a 34-25 half-time lead and set a pattern for the rest of the match.

Saracens didn’t let up in the second half and their lead continued to grow as Kadeen Corbin and George Fisher reminded the capacity crowd of how effective they can be with any goal-scoring opportunities while Razia Quashie and Jo Trip were outstanding in defence.

The second half also saw Chloe Essam and 18-year-old Aliyah Zaranyika make their VNSL debut for Mavericks as Ratnapala mixed and match her combinations.

By the end of the third quarter Mavericks were 53-37 up and continued that intensity in the final 15 minutes to leave the West Midlands with a winning start to 2020.

Speaking afterwards, Gabby Marshall said: “It’s always good to start the season with a win, obviously the first quarter wasn’t completely ideal getting down by so many goals, but the way we came back shows we’ve got a real good fight in the team this year.

“The second quarter we came out, we worked together both in attack and in defence and we got the benefits of that definitely.”

Get your tickets to Saracens Mavericks' first home game of 2020!