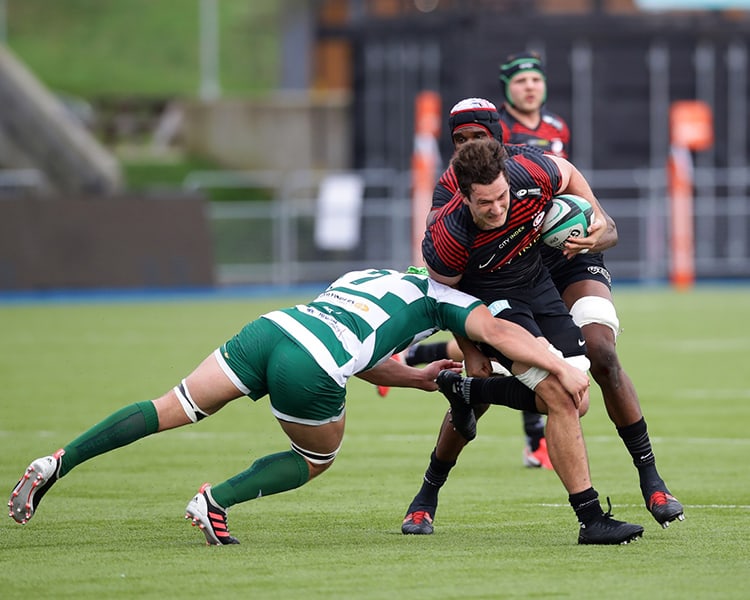 Centre Dom Morris grabbed a first-half double before Ealing replied through Rayn Smith and Will Davis, with Craig Willis’ penalty giving the away outfit a half-time lead.

Saracens responded on 43 minutes through Rotimi Segun to edge in front once more, however Trailfinders’ Hammond turned the game back in their favour and that is the way it stayed with Pat Howard and Shaun Malton crossing to confirm Ealing’s win.

Kapeli Pifeleti scored a consolation try for Mark McCall’s side in the closing stages.

Sarries set the tone with their intensity in the early exchanges with huge effort from Joel Kpoku, Janco Venter and Tom Woolstencroft resulting in an early turnover at the breakdown.

Their second retrieval resulted in points. Aled Davies’ box kick was spilt courtesy of Ben Harris’ aerial challenge and the ball fell kindly for Tom Whiteley who fed Morris in for a simple five points.

Scrum-half-turned-fly-half Whiteley added the extras and shortly after Willis kicked Ealing’s first points of the afternoon, the 25-year-old assisted the Men in Black’s second score.

A deft kick in behind almost landed perfectly for Segun, but the bounce, and a Trailfinders hand, meant the ball evaded the wing and instead found Morris for an easy finish.

Ealing hammered the Sarries door and eventually following a lot of huffing and puffing, they breached the Wolfpack line; captain Smit pirouetting his way over.

It sparked a barrage of away attacks and five minutes before the break they were rewarded for their positivity. Quick ball out wide led to prop Davis squeezing into the corner to give the visitors a three-point advantage at half-time.

The second half began as the first did for the hosts – a back scooting into the corner. Morris turned provider on this occasion to send the electric Segun speeding home.

His opposite number then enjoyed a run to the line. Collecting on the halfway, Hammond weaved inside from the touchline, beating several players in his way to score.

Then Howard brushed he whitewash thanks to a little help from his forward friends just past the hour to put Ealing out of sight with Willis’ penalty and a bonus-point Malton try making the victory more certain ahead of Pifeleti’s effort.